Earlier this spring, the Department of Defense (DoD) released its fifth Quadrennial Defense Review (QDR), a congressionally mandated review of DoD strategy and priorities. The 2014 QDR builds on the 2012 Defense Strategic Guidance, and seeks to adapt, reshape, and rebalance the U.S. military.

The QDR prioritizes three strategic pillars: defending the homeland against all threats, building security globally by projecting U.S. influence and deterring aggression, and remaining prepared to win decisively against any adversary should deterrence fail. The review also outlines three broad themes: an updated defense strategy, the rebalance of the joint force, and the department’s commitment to protecting the all-volunteer force.

The QDR is intended to set the course for DoD to address current and future conflicts and threats. Throughout the QDR, there are several references to the important role interagency and international partnerships play in DoD efforts and operations, including those in conflict prevention, capacity building, counterterrorism, and countering illicit drug trafficking. 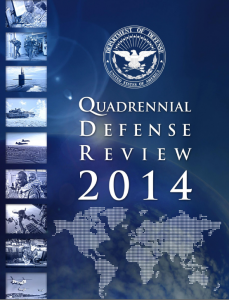