This June the Department of Defense (DoD) released its strategy for countering weapons of mass destruction (WMD). This new strategy rescinds and replaces the 2006 National Military Strategy for Combating Weapons of Mass Destruction, and seeks to ensure that the United States and its allies and partners are neither attacked nor coerced by hostile actors with WMD.

DoD’s WMD strategy lays out four objectives that focus on shaping the environment, cooperating with partners, and prioritizing early action in countering WMD. These objectives are:

These objectives are achieved through the strategy’s three lines of effort, which include preventing the acquisition of WMD, containing and reducing WMD threats, and responding to crises.

The strategy emphasizes the importance of cooperating with DoD partners, including other U.S. government departments and agencies, allies, and international bodies. The strategy recognizes the important role DoD’s interagency and international partners play in countering WMD, focusing on cooperative efforts to shape the security environment, and relying on the intellectual capacity of these partners to maintain and expand technical expertise. 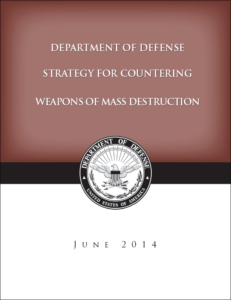 The Simons Center will publish a special edition InterAgency Journal on the topic of WMD in the spring of 2015.
More information about this edition and how to submit an article for consideration can be found here.