In early June, the Government Accountability Office (GAO) released a report examining the Department of State’s Bureau of Counterterrorism. In their report, GAO notes that they found that the Counterterrorism Bureau and other bureaus within the State Department were generally consistent with key practices for interagency collaboration. 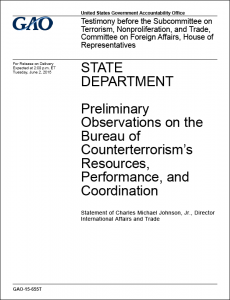