In May the Government Accountability Office (GAO) released a report recommending the Department of Defense (DoD) and the Department of Energy (DOE) update the Nuclear Weapons Council’s 1997 memorandum of agreement. DOE’s National Nuclear Security Administration (NNSA) and the DoD are responsible for managing aspects of the U.S. nuclear weapons stockpile, and the Nuclear Weapons Council includes senior officials from both departments who are working to modernize the nuclear enterprise.

GAO was tasked with reviewing the Council’s role, responsibilities, and effectiveness, including the extent to which the Council’s actions are consistent with key practices for interagency collaboration. GAO reviewed laws, agreements, and Council documents and compared Council actions with key practices and considerations for interagency collaboration that GAO had identified in previous years.

GAO found that the Council’s actions to coordinate DOD’s and NNSA’s nuclear weapons stockpile responsibilities are generally consistent with most key practices for interagency collaboration, but the Council’s actions are not fully consistent with those practices and related key considerations in two areas: 1) the Council does not have an up-to-date agreement that reflects the processes it uses to carry out its responsibilities; and 2) the Council does not require DoD and NNSA officials to attend Council support committee meetings. 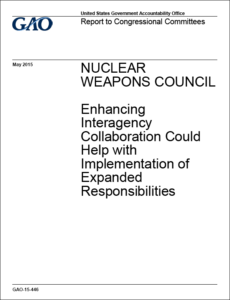 The Simons Center published a special edition InterAgency Journal on the topic of weapons of
mass destruction in the spring of 2015. This edition of the Journal can be found here.