The report examines illicit trafficking across Mexico’s border with Guatemala and Belize, and the impact such trafficking has on law enforcement and U.S. security interests. GAO-16-235 reviews the activities undertaken by U.S. agencies to build partner capacity to combat firearms trafficking, and the extent to which they considered key factors in selecting the activities. The report also looks at the progress the United States has made in building such capacity.

GAO found that U.S. agencies and their implementing partners have undertaken a number of capacity-building activities that support counter-firearms trafficking efforts in Belize, Guatemala, and Mexico. According to GAO, U.S. agencies and implementing partners have achieved many of their goals, but could enhance their efforts to measure and report on progress.

GAO recommends that the Bureau of Alcohol, Tobacco, Firearms and Explosives establish and document performance targets for its key counter-firearms trafficking activities, and that Department of State work with other U.S. agencies and implementers to help ensure that progress reports identify key challenges and plans to address them. Both agencies agreed to these recommendations. 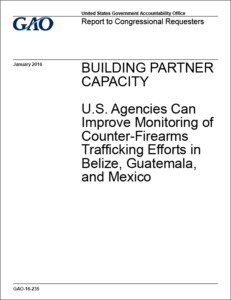