In May, the President’s Task Force on 21st Century Policing released their final report identifying best practices and recommendations for mending relationships between law enforcement and the communities they protect and serve. Prior to the release of the report, the task force hosted multiple listening sessions and teleconferences to hear testimony, gain input, and discuss and deliberate recommendations.

The task force is made up of representatives from the Department of Justice and other law enforcement entities, and is co-chaired by Charles H. Ramsey, Commissioner of the Philadelphia Police Department, and Laurie O. Robinson, Professor at George Mason University. The task force was established through Executive Order 13684 in December 2014.

Their report focuses on six main topic areas, or “pillars”: Building Trust and Legitimacy, Policy and Oversight, Technology and Social Media, Community Policing and Crime Reduction, Officer Training and Education, and Officer Safety and Wellness. These pillars emphasize community engagement, transparency, and interagency cooperation among law enforcement entities, and the report encourages the Department of Justice to explore public-private partnership opportunities that would help facilitate the task force’s recommendations.

While the task force co-chairs recognize that more work will be needed to address many longstanding issues and challenges, Ramsey and Robinson say that preparing the report “demonstrated to us that Americans are, by nature, problem solvers,” and said that they hope the recommendations included in the report will “meaningfully contribute to our nation’s efforts to increase trust between law enforcement and the communities they protect and serve.” 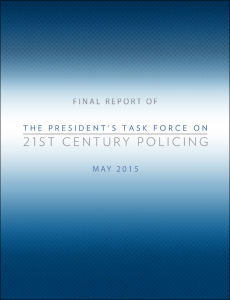