On November 17, the Government Accountability Office (GAO) released a report following their review of the proposed Interagency Rotation Program included in the 2013 National Defense Authorization Act (NDAA). The Interagency Rotation Program included in the 2013 NDAA called for national security personnel to be assigned to work at another agency for professional development purposes and to enhance the government’s ability to collaborate and respond effectively to complex national security challenges.

The GAO report provides an assessment of the extent to which actions have been taken to establish and implement the Interagency Rotation Program. During their review, GAO analyzed actions taken by the National Security Personnel Committee, assessed their National Security Human Capital Strategy, and interviewed several U.S. government agencies, including the Office of Personnel Management and the Departments of Defense, State, and Homeland Security.

GAO found that the Interagency Rotation Program has not come to fruition because there has not been sufficient leadership and oversight of the program. While the National Security Personnel Committee’s National Security Human Capital Strategy, issued in March 2014, specifically assign roles, responsibilities, and tasks to the Committee and other participating departments and agencies, actions have not been taken by the agencies because of a need for further guidance on how to proceed with their assigned roles, responsibilities, and tasks. In their report, GAO stated that “Without a clear leadership and oversight structure […] it is unlikely that implementation of the program will move forward.”

GAO recommends that the Office of Personnel Management collaborate with the Committee to establish a clear leadership and oversight structure to guide implementation of the Interagency Rotation Program and work with the departments and agencies to identify and take action on necessary next steps for implementation. 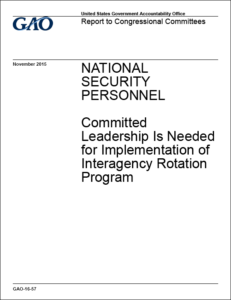