Earlier in February, the RAND Corporation released a report documenting lessons learned while establishing the Guatemalan Interagency Task Force (IATF) Tecún Umán. The IATF was established for the interdiction of drug flow across the Mexican border.

Guatemala is a major transit point for drugs bound for the U.S., and as such receives counternarcotics aid and technical assistance from the U.S., often through U.S. Southern Command and U.S. Army South. As part of their counternarcotics missions, U.S. Southern Command and U.S. Army South have identified the IATF as one of their top priorities for U.S. support in Central America, and it is believed that the success of IATF Tecún Umán can serve as a model for other task forces operating along borders in the area.

The report examines what progress has been made by the task force in combating international drug trafficking, what lessons can be learned from the development of the IATF, and what the U.S. and Guatemalan governments can do to overcome the challenges that still face IATF Tecún Umán.

The report emphasizes the importance of establishing the interagency legal framework early, which would have helped ease or avoid the “growing pains” experienced while developing interagency relationships. The report also recommended developing an intelligence capability organic to the task force, transitioning to police authority and leadership (vs. military), identifying measures of success, communicating the IATF’s purpose and success to the public, and maintaining equipment. 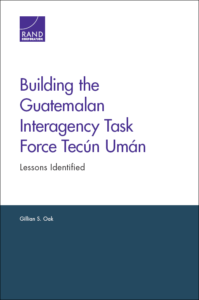