GAO analyzed policy, plans, and other documentation and interviewed public and private sector officials from SSAs when conducting their review. Among GAO’s objectives were to determine the extent to which the SSAs have:

GAO found that there were significant cyber risks to over  two thirds of the sectors, with the remaining sectors’ risks undetermined by the SSAs. GAO also found that SSAs generally took actions to mitigate cyber risks and vulnerabilities for their respective sectors. The SSAs also used multiple public-private and cross-sector collaboration mechanisms to facilitate the sharing of cybersecurity-related information, including the councils of federal and non-federal stakeholders. While many SSAs had not developed metrics to measure and report on their cyber risk mitigation activities, GAO noted that the Departments of Defense, Energy, and Health and Human Services had established performance metrics for their sectors.

GAO recommends that certain SSAs collaborate with sector partners to develop performance metrics and determine how to overcome challenges to reporting the results of their cyber risk mitigation activities. Four of these agencies concurred with GAO’s recommendation, while two agencies did not comment on the recommendations. 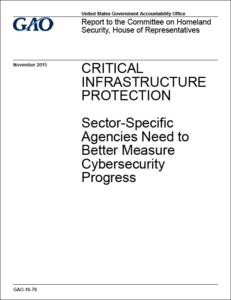