In April the American Academy of Diplomacy (AAD) published a report examining a crucial component of America’s security – diplomacy. American Diplomacy at Risk “aims to stimulate the changes necessary to prepare American diplomacy for the challenges of the 21st century,” and criticizes the politicization of American diplomacy. The report includes suggestions to improve the excellence and professionalism of both the Foreign and Civil Services.

When noting the problems currently facing the Foreign and Civil Services, AAD recognizes “The Foreign Service lacks the professional education and standards to meet its current heavy responsibilities and to create its necessary future senior leaders,” while “The Civil Service is mired in an outdated system with limited coherent career mobility.”

The report looks at the politicization of the policy and appointment process in the State Department, condemning the “sale” of offices to non-Foreign Service, politically-appointed ambassadors who “lack the appropriate experience or credentials for that role.” AAD also notes that between 1975 and 2013, the proportion of Foreign Service Officers in senior positions declined from 60% to between 25-30%. This decline has resulted in the loss of long-term field perspective, the loss of merit-based incentives, and the loss of Washington experience. The latter effect has also resulted in a loss of experience in the interagency aspects of making and implementing foreign policy.

AAD’s assessment of the Civil Service’s struggles is equally severe. AAD cites politicization, budget problems, the increase in State Department contractors, and a lack of training and career advancement opportunities, among the problems facing the Civil Service, and suggests expanded professional education and training, as well as a “career ladder” for the upper ranks. 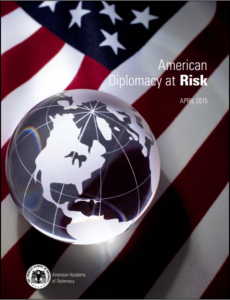