In May the Atlantic Council published a report that focuses on Central America’s Northern Triangle – El Salvador, Guatemala, and Honduras – and how trafficking, violence, and economic troubles in the area effect U.S. national security, primarily along the U.S. southern border.

According to the report, U.S. assistance to the Northern Triangle has been very effective. However, the authors note that more can be done, stating that “Only long-term investment and partnership in sustainable economic development, rule of law, and security will set the region on the right course.”

Secretary of Homeland Security John Kelly spoke at the launch of the report, saying “If we can improve the conditions—the lot of life of Hondurans, Guatemalans, Central Americans—we can do an awful lot to protect the southwest border.” 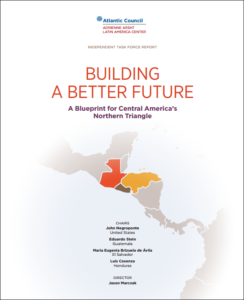