During their evaluation, GAO found that DoD’s coordination with HHS and DHS align with the best practices to facilitate collaboration across agency boundaries. GAO also determined that the joint research campus shared by DoD, HHS, and DHS – the National Interagency Biodefense Campus at Fort Detrick, Maryland – has a governance structure that allows the agencies to leverage available resources and facilitate scientific exchange. There are also interagency agreements and established processes that aid in communication between the agencies and help identify threats and risks.

While conducting their review, GAO found that DoD does not use its established process for annually updating its list of threat priorities, and suggested that DoD implement a process to update its list of biological threats according to its current policies. DoD concurred and identified steps to address the recommendation. 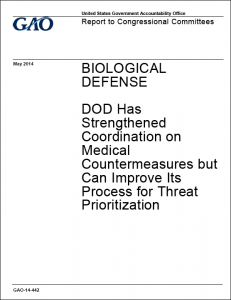 For more information about GAO-14-442, please follow the link below.
GAO-14-442, Biological Defense: DoD Has Strengthened Coordination on Medical Countermeasures but Can Improve Its Process for Threat Prioritization, U.S. Government Accountability Office