The U.S. Government Accountability Office (GAO) released a report in May of this year assessing the collaborative efforts made by the Department of Transportation (DOT) and the Federal Emergency Management Agency (FEMA) during Hurricane Sandy. The report, GAO-14-512, focuses on DOT and FEMA’s efforts to in emergency transportation relief during and after the October 2012 disaster.

The report assesses the progress made by DOT in managing Disaster Relief Appropriations Act surface transportation funds, and compares the Federal Transit Administration’s (FTA) new Public Transportation Emergency Relief program to FEMA’s and the Federal Highway Administration’s emergency relief programs. GAO also examined the extent to which FTA and FEMA have implemented their memorandum of agreement to coordinate their roles and responsibilities when providing assistance to transit agencies.

According to GAO, while FTA and FEMA have a memorandum of agreement for assisting transit providers during emergencies, they are limited in their ability to delineate specific roles and responsibilities for future disasters due to differences in their funding. FTA and FEMA also have not determined how collaborative efforts will be monitored, evaluated, and reported, relying on informal communication instead.

GAO had previously advocated for a means to evaluate the results of collaborative efforts between the FTA and FEMA, and GAO reiterated that recommendation in this report. GAO has proposed that DOT and the Department of Homeland Security direct FTA and FEMA to establish specific guidelines to monitor, evaluate, and report the results of collaborative efforts—including their communications program and protocol as contemplated in their memorandum of agreement. 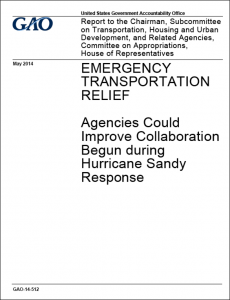