In late September, the Government Accountability Office (GAO) released a report that reviewed the level of preparation of 27 major U.S. cities considered to be at high risk of a nuclear terrorist attack. GAO’s findings were based on the survey responses of the cities’ emergency managers, the review of pertinent federal guidance, and interviews with Federal Emergency Management Agency (FEMA) officials and others.

The report, GAO-13-736, examines issues related to response preparedness for nuclear attacks involving radiological dispersal devices (RDDs) and improvised nuclear devices (INDs), including the 27 cities’ assessments of RDD and IND risks and the development of response plans. The report also examines the cities’ perceptions of their abilities to respond within the first 24 hours, as well as their perceptions of the need for federal support in early response to these attacks.

GAO-13-736 provides a brief history of recent progress in whole of government preparedness planning, reviewing the Department of Homeland Security’s (DHS) 2011 National Preparedness Goal, which stated that all levels of government and the whole community should present and assess risks to provide a common understanding of the threats and hazards confronting the country, and the National Preparedness System, which includes a series of integrated national planning frameworks for five mission areas—prevention, protection, mitigation, response, and recovery.

The report also stressed the importance of interagency and community involvement in preparing for and responding to a disaster. While DHS has lead federal coordinating responsibility for attacks involving nuclear or radiological materials, FEMA, the Departments of Energy, Defense, and Health and Human Services, and other U.S. departments and agencies also play an important role.

While conducting their research, GAO found that federal guidance on the type and timing of nuclear response assistance is not readily available or understood by all emergency managers. This condition could lead to a disjointed and untimely response that might increase the consequences of RDD or IND attacks. Emergency managers also reported a need for improved procedures and more information that FEMA is addressing. In addition, most emergency managers reported their city needed federal funding to maintain current capabilities to respond to RDD and IND attacks. According to DHS guidance, response capabilities are developed through planning, training, equipping, and exercising, which are essential elements of an integrated, capability-based approach to preparedness.

GAO recommends that FEMA develop guidance to clarify the early response capabilities needed by cities for RDD and IND attacks. While, FEMA did not concur with this recommendation, GAO believes that gaps in early response abilities warrant federal attention. 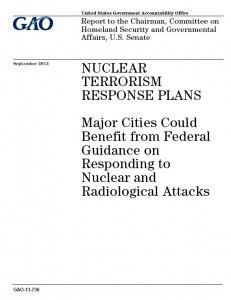 For more information about GAO-13-736, please follow the link below.
GAO-13-736, Nuclear Terrorism Response Plans: Major Cities Could Benefit from Federal Guidance on Responding to Nuclear and Radiological Attacks