A press release states that the Safe DRONE Act would “ensure that the United States keeps pace in the development and implementation of unmanned technology.” In the release, Sen Warner is quoted saying “Not since the nascent days of the cell phone industry have I seen technology with as much transformative potential as unmanned systems.” Warner continues to say that the bill “takes important steps forward to safely integrate this technology into commercial use and further harness its potential.”

The Safe DRONE Act directs robust collaboration to address critical needs, calling for interagency working groups that include both federal and non-federal representatives. A working group focused on communications and spectrum needs would include representatives from the Federal Aviation Administration (FAA), Federal Communications Commission (FCC), National Telecommunications and Information Administration, National Aeronautics and Space Administration (NASA), and the Departments of Defense, Justice, and Homeland Security (DHS), as well as non-federal entities such as UAS manufacturers and operators. A safety and security working group headed by the FAA and DHS would include the Secretary of Homeland Security, Administrator of the FAA, Secretary of Defense, and Director of the FBI, among others.

The bill also calls for the Secretary of Transportation and NASA to develop a plan for UAS traffic management, and emphasizes the role of UAS in assisting emergency response operations, such as search and rescue operations. 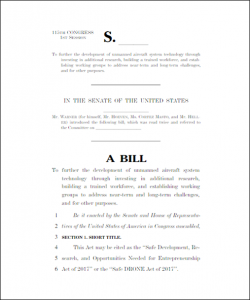