On January 15, the U.S. Senate Select Committee on Intelligence released their declassified bipartisan report on the September 2012 terrorist attacks in Benghazi. The report is based on dozens of committee hearings, briefings and interviews, and includes 18 recommendations designed to improve security of American diplomatic and intelligence facilities abroad.

The report asserts that the attacks of September 11 and 12, 2012 were preventable based on known security shortfalls at State Department Mission in Benghazi, and partially attributes the failures to prevent and respond to the attacks to a lack of cooperation between the different government agencies. The report found that significant strategic warning had been provided by the intelligence community in the months prior to the attack, and that the State Department failed to increase security enough to address the threat. Additionally, U.S. military assets were not positioned to respond in time to save the four Americans killed in the attack, though they were able to provide situational awareness for those under siege.

The report also included many recommendations relating to preparing for and responding to similar attacks in the future, including recommendations to halt the operation of State Department facilities that fall short of security standards. The report stressed the importance of interagency cooperation to ensure the safety and security of U.S. diplomatic, military, and intelligence personnel, declaring that it is imperative that the Departments of State and Defense as well as the intelligence community work together to identify and prioritize the largest gaps in coverage for the protection of U.S. diplomatic, military, and intelligence personnel in high-threat posts around the world. 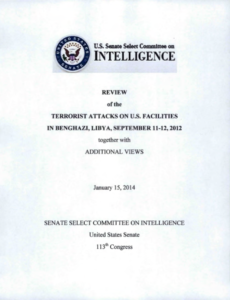