Last week the U.S. Department of State issued The Global Illicit Trade in Tobacco: A Threat to National Security, a publication outlining the whole-of-government effort to combat the illicit trade in tobacco. The publication was released on December 2, at a meeting of the Interagency Working Group to Combat Illicit Tobacco, which focuses on collaboration in countering domestic and international crime, and includes participants from the Departments of State, Justice, Homeland Security, and Health and Human Services, as well as the FBI, other U.S. government agencies, and representatives from various nations.

The Global Illicit Trade in Tobacco outlines the ill effects of cigarette smuggling, such as lost tax revenue, transnational crime, corruption, and terrorism. The publication also details efforts made by U.S. government agencies in combating the illicit trade in tobacco. For example, State partners with federal agencies and foreign partners to increase information sharing and capacity building abroad, and forms public/private partnerships with parties interested in combating the trade of illicit tobacco products. State also partners with intergovernmental agencies, such as the Organisation for Economic Co-operation and Development and INTERPOL, to combat the illicit trade in tobacco products.

The Department of Homeland Security fights the illicit trade in tobacco through efforts undertaken by U.S. Customs and Border Protection (CBP) and U.S. Immigration and Customs Enforcement (ICE). Among other activities, CBP is responsible for law enforcement efforts to combat the trafficking of illicit tobacco products imported into and exported from the United States, while ICE operates a task force able to leverage the resources and skills of each partner agency to respond to the trafficking of various types of contraband, including tobacco products.

The publication also outlines the roles and efforts of the Department of Justice, FBI, the Food and Drug Administration, and other U.S. departments and agencies, as well as international partners. 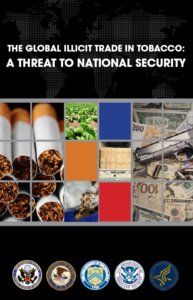 For more information about State’s efforts, please follow the links below.
The Global Illicit Trade in Tobacco: A Threat to National Security, Department of State
New Whole-of-Government Effort To Combat the Security Threat of Illicit Tobacco Trade, Department of State