Earlier this month, the Center for Strategic & International Studies released a study analyzing the causes of instability in the Middle East and North Africa. The study, Changing U.S. Strategy: The Search for Stability and the “Non-War” Against “Non-Terrorism,” examined the causes of terrorism, insurgency, and other forms of violence. According to the study, the U.S. has not actually fought a “war on terrorism” since late December 2001, as Bin Laden, Al Qa’ida, and key elements of the Taliban had escaped to Pakistan by that time.

Also according to the study, U.S. efforts in Afghanistan and Iraq focused too much on terrorism, ignoring the broader causes of violence and extremism. The study also asserts that most of the violence that was labeled as terrorism by the State Department is actually a form of insurgency that is cause by internal instability. As such, the U.S. failed to develop effective civil-military efforts to address the underlying causes of civil violence, and needs to make fundamental changes in the ways it addresses counterterrorism and reduces the civil and military causes of instability.

The study emphasizes the need for partnerships with regional friends and allies, and calls for changes in the ways the Department of Defense, State Department, and USAID address the nature of instability and violence in the Middle East and North Africa region. The study also calls for strong U.S. country teams that combine civil-military-internal security efforts, as well as fully integrated interagency plans, budgets, and measures of effectiveness. 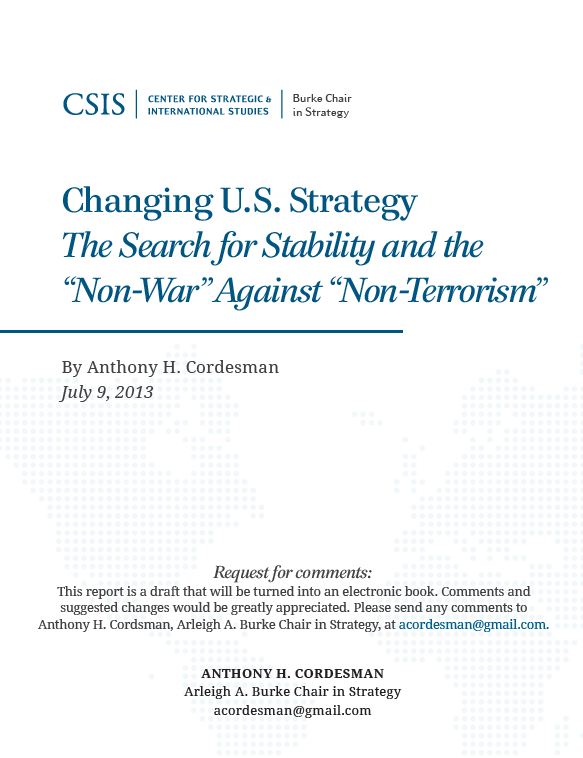 For more information of the CSIS study, please follow the links below.
Changing U.S. Strategy: The Search for Stability and the “Non-War” Against “Non-Terrorism,” Anthony H. Cordesman, Center for Strategic & International Studies
Egypt, Syria, the Search for Regional Stability and Learning from the “Non-Wars” Against “Non-Terrorism,” Center for Strategic & International Studies