In the past two months, the U.S. Agency for International Development (USAID) has released a series of fact sheets outlining their role in the U.S. response to continuing conflict and hardship in Iraq. The fact sheets provide and overview of USAID and other U.S. government agency efforts, as well as the efforts of the United Nations and other international relief organizations.

Iraq Complex Emergency Fact Sheet #7 was released Friday, September 26, and is the latest in the series of fact sheets that began by documenting the escalating insecurity and population displacement in early August. 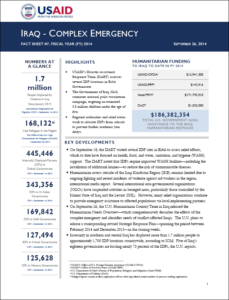