Earlier this month, the U.S. Agency for International Development (USAID) released their updated Civilian-Military Cooperation Policy. The new policy builds on the previous policy, which was issued in 2008.

The 2008 Civilian-Military Cooperation Policy established the foundation for cooperation between the USAID and the Department of Defense (DoD). The 2008 policy also established civilian-military cooperation as fundamental to a whole-of-government approach to contemporary national security challenges.

The updated policy builds on the 2008 policy’s foundation, and incorporates what USAID has learned from working with DoD, including lessons learned from experiences in Iraq, Afghanistan, and other countries where USAID and DoD personnel have shared the same operating space.

The USAID policy was created with input from military leaders, diplomats, and development professionals, and focuses on how collaboration with the military has the potential to “save lives faster than ever before” and addresses persistent challenges that plaque fragile communities. 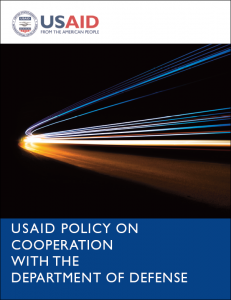