Earlier this month, the White House and the U.S. Agency for International Development (USAID) released factsheets updating the public on the U.S. government response to the Ebola outbreak. The White House factsheet was released October 6, and USAID released its factsheet on October 15.

The White House factsheet laid out the strategy’s four key goals: controlling the epidemic at its source in West Africa; mitigating second-order impacts, including blunting the economic, social, and political tolls in the region; engaging and coordinating with a broader global audience; and fortifying global health security infrastructure in the region and beyond, including within the U.S. The White House factsheet also outlines U.S. involvement in the international response to the Ebola outbreak, as well provisions for a response in the U.S. Government departments and agencies included in the White House’s whole-of-government response include the Departments of Defense (DoD) and Health and Human Services (HHS), the Centers for Disease Control and Prevention (CDC), and USAID.

USAID’s factsheet highlights recent remarks by USAID Administrator Rajiv Shah and President Obama, and summarizes the U.S. whole-of-government response to the Ebola outbreak in West Africa. The factsheet reports that the U.S. Ebola response is being coordinated in part by USAID, and leverages the expertise of the Department of State, DoD, HHS, CDC, and other federal departments and agencies. The USAID factsheet also provides an update on the international response to the Ebola outbreak, specifically the role of the United Nations (U.N.) and the U.N. World Health Organization (WHO).

The Ebola outbreak has been deemed the most severe public health emergency in modern times by Director-General WHO Dr. Margaret Chen. 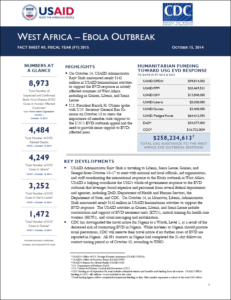