Simons Center Director Bob Ulin welcomed the ARNSF members, some of whom also introduced their guests, and then introduced retired Col. Steve Banach who provided the forum with a presentation on virtual warfare. 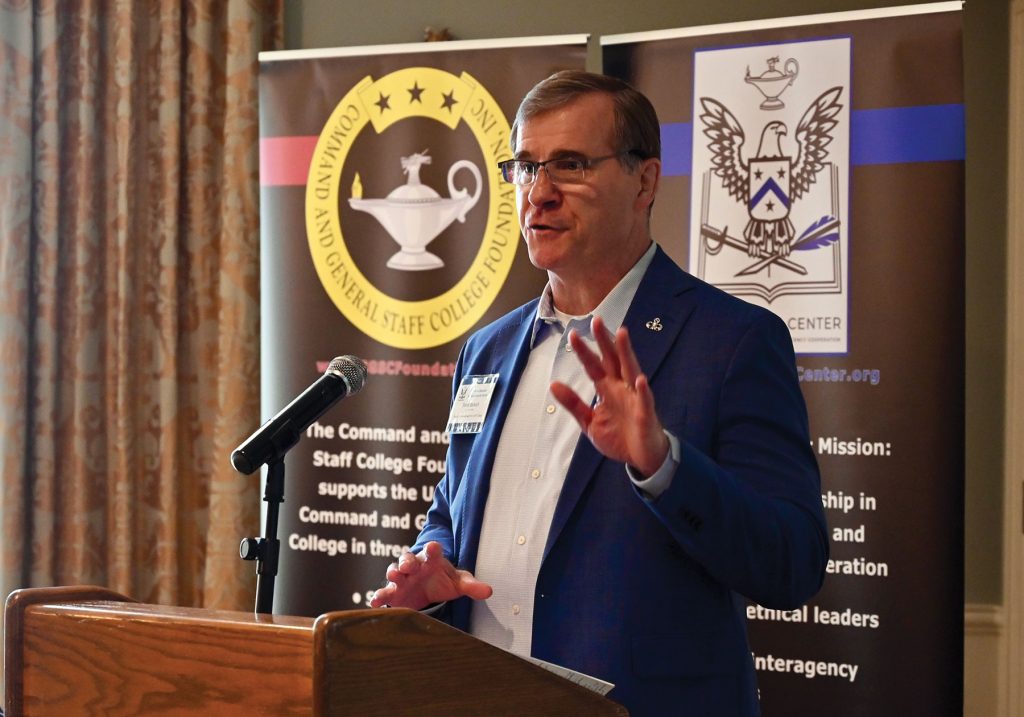 (Top photo and above) Retired Col. Steve Banach provides his presentation on virtual warfare for the Arter-Rowland National Security Forum luncheon event on Feb. 24, 2022, at the Carriage Club in Kansas City.

Banach said that his presentation was focused on framing the problem. With the conduct of warfare and nation-state security transitioning from a tactical physical battle space to a strategic and unending global virtual war paradigm, the world is experiencing a new ubiquitous form of warfare with Russia and China as the United States’ greatest competitors. He outlined how the entity that controls the virtual domain and masters virtual war campaigning first, will indirectly achieve social control, and will win every war they engage in, at pennies on the dollar. Banach said the first issue we have is that the “great captains of war” have historically missed identifying new threats and wars. He said we have an opportunity to develop solutions that are favorable to the U.S., but we must act now.

After his presentation, Banach answered questions from the members who were especially charged up on the day that Russian forces had begun their invasion of Ukraine.

Ulin closed out the event and reviewed the schedule for future ARNSF events. Forum members and their guests gathered for a group photo as the luncheon adjourned.

Col. Steve Banach, U.S. Army, Ret., served 27 years in uniform, retiring in 2010. He is a Distinguished Member of the 75th Ranger Regiment. While commanding the 3rd Ranger Battalion, he led U.S. Army Rangers during a historic night combat parachute assault into Afghanistan on Oct. 19, 2001, as the “spearhead” for the Global War on Terror for the United States of America, after 9/11. Banach subsequently led U.S. Army Rangers in a second combat parachute assault into Al Anbar Province in western Iraq in 2003. He earned a Bronze Star Medal for valor in combat, and a Bronze Star Medal for service to the nation. He also earned two Bronze Combat Jumps Stars.

Arter-Rowland National Security Forum members and their guests gather for a group photo after the Forum luncheon on Feb. 24, 2022, at the Carriage Club in Kansas City.

ARNSF events are only open to ARNSF members and their guests. If you are not a member but are interested in joining, contact John Nelson at John.nelson@cgscf.org or visit the Forum web page  for more information.