Simons Center Director Bob Ulin welcomed the ARNSF members, some of whom also introduced their guests, and then introduced retired Col. Matt Dimmick who provided the forum with a presentation on the capabilities of the Russian military. 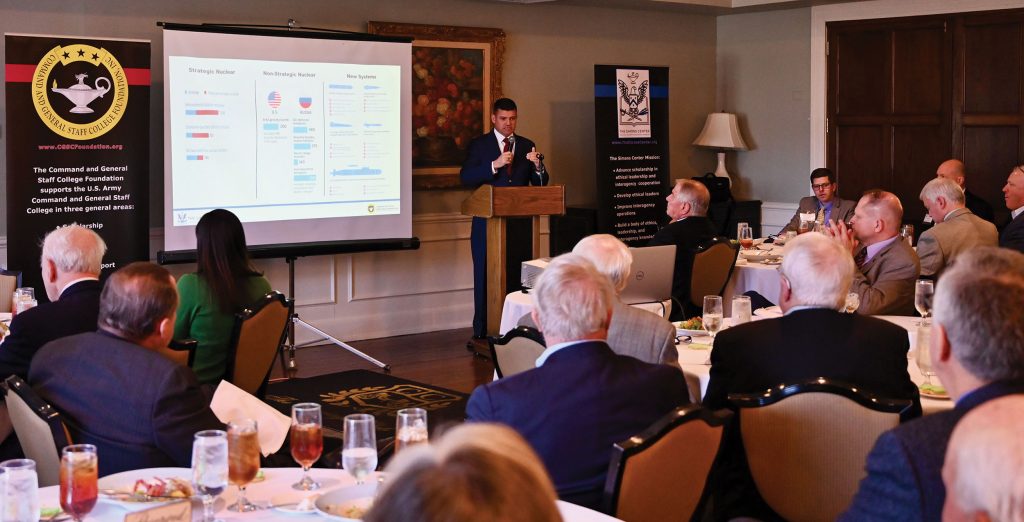 Dimmick served 29 years in uniform, retiring in 2021. In his last assignment he worked as the director for Russia and Eastern Europe on the National Security Council staff for both the Trump and the Biden administrations. He previously served as the Russia Director for the Secretary of Defense from 2016 to 2019, and also held the positions as Defense Attaché in Tbilisi, Georgia, Deputy Foreign Policy Advisor for the Chief of Staff of the Army, and Assistant Army Attaché in Moscow. He is a graduate of the United States Military Academy, holds a Master of Arts in National Strategy from the Eisenhower School for National Security and Resource Strategy, and a Master of Arts in Russian and Eastern European Studies from the University of Kansas.

Given his qualifications and recent duty positions, Dimmick’s presentation was well-received by the forum members and their guests as he laid out the numbers and types of Russia’s personnel and equipment, while providing insights to their methods of military leadership. He also provided some unclassified information on Russian troop locations and the likely strategy of the Russian government in these areas. Inevitably, given the current situation in eastern Europe and the Russian invasion of Ukraine, there were several questions from the audience about how that situation may play out in the coming months.

After the lengthy question and answer period, Ulin closed out the event, thanking Dimmick and presenting him with a commemorative coin and coffee cup and previewing the schedule for future ARNSF events. Foundation President/CEO Rod Cox also thanked Dimmick and made an announcement about upcoming Foundation events in addition to the Arter-Roland National Security Forum.

ARNSF events are only open to ARNSF members and their guests. If you are not a member but are interested in joining, contact John Nelson at John.nelson@cgscf.org or visit the Forum web page  for more information.

« Read Previous Post: Secretary of the Army visits CGSC
Read Next Post: North Korea and the Trump Administration topic of 'General and the Ambassador' »