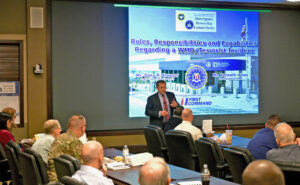 Supervisory Special Agent Dana Kreeger from the FBI’s Kansas City Field Office kicks off the InterAgency Brown-Bag Lecture on Feb. 25, 2020, in the Arnold Conference Room of the Lewis and Clark Center.

Kreeger and Hines apprised the audience on the Bureau’s roles, responsibilities, and capabilities regarding a weapons of mass destruction or terrorist incident, including information on crisis response, incident determination, and crime scene operations. The agents gave a brief background on the 56 FBI field offices located throughout the U.S. before diving deeper into the Kansas City field office’s role in preventing and investigating domestic terrorism and weapons of mass destruction (WMD). Kreeger and Hines paid particular attention to the use of toxins and low tech biological weapons, threats that usually fly under the radar, as well as the use of explosives, a threat that receives considerably more press.

After reviewing two case studies of domestic terrorism in the midwest – the cases of Terry Loewen and John Booker, Jr. – Kreeger and Hines took questions from an eager audience. An audience member asked the agents about whether “lone wolves” or groups of bad actors were harder to predict and track, to which the agents replied that individuals are more difficult than groups. Other questions involved FBI coordination with the Centers for Disease Control and Joint Task Force North. One question that piqued everyone’s attention was what threat keeps the two agents up an night. To that, Hines responded that he is concerned with the ease with which bad actors can exchange information via mobile phone or various communication apps, the ease with which individuals can now be radicalized from their homes via the internet (especially via YouTube), and the ease with which they may gather the information needed to execute a low-tech attack. Kreeger concurred, saying that the dark web contains a “treasure trove” for bad actors. Kreeger also cited the speed at which information and misinformation can spread, which can be exploited to incite mass panic, especially in the event of a real or perceived biological attack.

Supervisory Special Agent Dana R. Kreeger serves as the Weapons of Mass Destruction Coordinator for the FBI’s Kansas City office. Joining the Kansas City office in 2009, he has served with the Domestic Terrorism and WMD Squad and as the Team Leader for the Hazardous Evidence Response Team. Kreeger joined the FBI in 2002, and previously served in the Portland, Oregon field office focusing on domestic terrorism and WMD threats conducting investigations in both Oregon and Washington. Prior to joining the FBI, Kreeger worked for Black and Veatch engineering and design company in Kansas City, Missouri.

Intelligence Analyst Kenneth Hines is assigned to the FBI Kansas City Field Office. He is an expert in domestic and home-grown terrorism and weapons of mass destruction investigations. Hines has over 25 years strategic and tactical intelligence experience as both a retired U.S. Coast Guard officer and FBI Intelligence Analyst. Prior to joining the FBI, Hines was the chief bomb and arson investigator/bomb technician for a large county government agency in Missouri. He holds a bachelor’s degree in communications from the University of Missouri at Columbia and a MBA from Lindenwood University. Hines is a graduate of the FBI Academy at Quantico and the Naval War College. He has been awarded numerous awards for his service to our country to include a Presidential Unit Citation.

« Read Previous Post: Featured Article: Is it Time for an Interagency Goldwater-Nichols Act?
Read Next Post: Simons Center plans for the future with CGSC faculty »