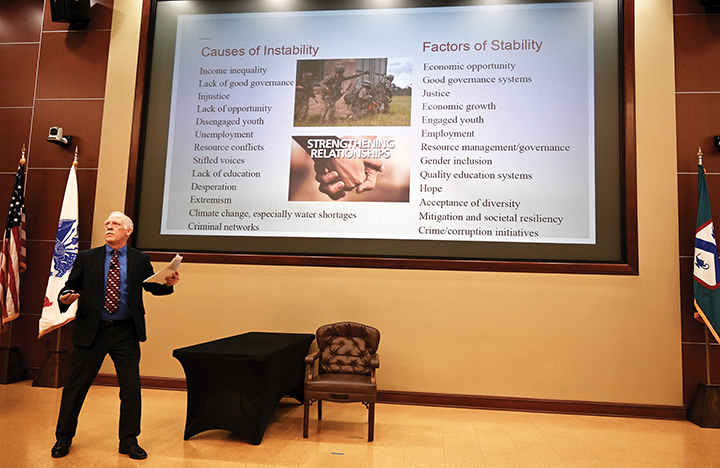 The sixth presentation of the InterAgency Brown-Bag Lecture Series for CGSC academic year 2022 was conducted March 22, in Marshall Auditorium of the Lewis and Clark Center on Fort Leavenworth. 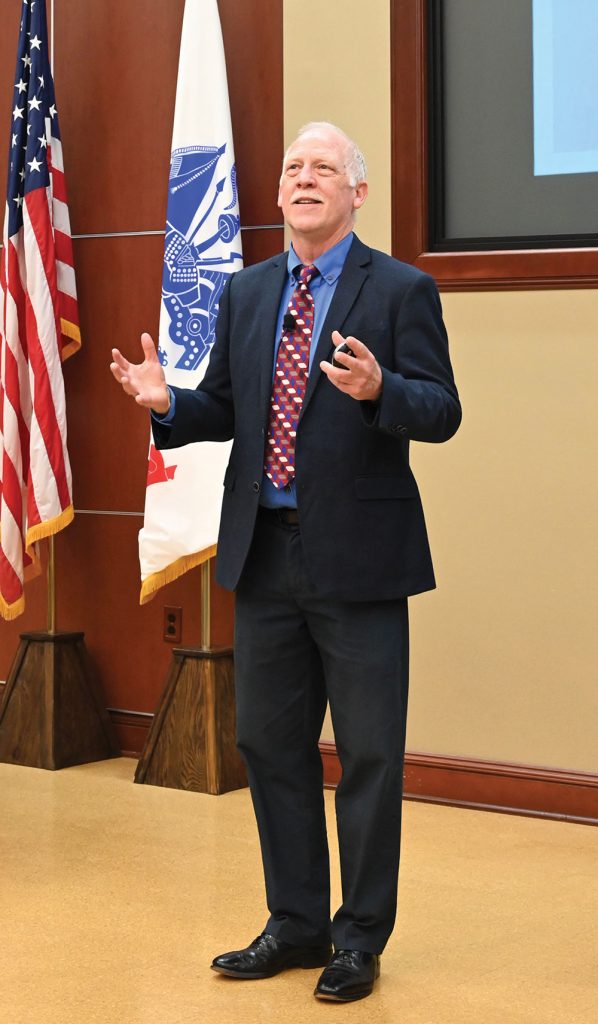 (Top photo and above) Dr. Mark Sorensen, the CGSC Distinguished Chair for Development Studies, presents the InterAgency Brown-Bag Lecture focused on the U.S. Agency for International Development (USAID) on March 22, 2022, in Marshall Auditorium of the Lewis and Clark Center on Fort Leavenworth.

CGSC Foundation President/CEO Rod Cox provided welcoming remarks and introduced Dr. Mark Sorensen, the CGSC Distinguished Chair for Development Studies. Sorensen led a discussion on how the U.S. Agency for International Development (USAID) leads America’s development assistance abroad and how USAID coordinates with defense professionals. He began his discussion with a detailed look at USAID’s mission statement and where the agency is currently deployed around the world. After his presentation he conducted a question and answer session with attendees, including answering questions about USAID’s current humanitarian assistance efforts in eastern Europe.

Dr. Mark G. Sorensen is an economic and business development specialist with more than 40 years of experience to include almost 20 years with the USAID. At USAID he has served in a variety of supervisory roles and assignments to include duty in Pakistan, Brazil, South Sudan, Iraq, Georgia, Mongolia, and Sri Lanka as well in Washington, D.C. While in Iraq from 2009-2011, he served on a Provincial Reconstruction Team (PRT) and directed USAID programs in the Divala Province. He holds a doctorate in education from the University of Houston, an MBA from Texas A&M at Kingsville, a master’s from the University of Florida, a Masters of Strategic Studies from the U.S. Air War College, and a B.S. and a B.A. from the University of Wisconsin at Stevens Point. His language proficiency includes fluency in both Spanish and Portuguese. He is also the author of several publications and the recipient of several meritorious honor and exemplary service awards.

The InterAgency Brown-Bag Lecture Series is co-hosted by the U.S. Army Command and General Staff School (CGSS) and the CGSC Foundation’s Arthur D. Simons Center for the Study of Ethical Leadership and Interagency Cooperation. The series is an extracurricular, interagency topic-focused series that is intended to help enrich the CGSOC curriculum. Unless otherwise announced, the presentations are scheduled each month from 12:30-1:30 p.m. in the Arnold Conference Room of the Lewis and Clark Center on Fort Leavenworth.

The CGSC Foundation has received support for all brown-bag lectures in academic year 2022 from First Command Financial Services in Leavenworth, Kansas.

The next lecture is the series is set for April 20, 2022, with a presentation on the Federal Bureau of Investigation (FBI). Click here for the full schedule.