FORT LEAVENWORTH, Kan. (April 21, 2020) This year we celebrate the 10th anniversary of the Simons Center and the work the Center does in the interagency arena. For 10 years the Simons Center has sought a better understanding of interagency operations and cooperation and ten years ago today, April 21, 2010, Mr. Ross Perot visited Fort Leavenworth and cut the ribbon for the Center he helped envision.

Since its inauguration, the Simons Center has matured into the professional education resource it was envisioned to be.

“For the last 10 years we have all benefited from the valuable work the Simons Center has accomplished,” said CGSC Foundation President/CEO Rod Cox, who also served as the director of the Simons Center for nearly three years before becoming the leader of the Foundation. “The Simons Center is one of a few organizations, maybe the only one, that solely focuses on the interagency and how the various agencies and departments of the U.S. government work together to accomplish their objectives.”

Cox points to the InterAgency Journal as one of the main venues through which the Simons Center accomplishes its mission. 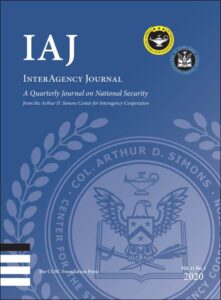 “The InterAgency Journal is a refereed professional journal that allows for the authors of the various articles to share their experiences, their research and their observations and opinions about interagency matters in a variety of settings,” Cox said. “In addition to the IAJ we have a whole series of publications (InterAgency Papers, InterAgency Essays and InterAgency Studies) plus our online interagency bibliography that all add to the professional discourse on interagency operations.”

In addition to its publications series, the Simons Center cohosts the “InterAgency Brown-Bag Lecture Series” which offers interagency-focused lectures from selected presenters to the CGSC students and faculty and local audiences. Most of the lectures are available on the Foundation’s YouTube channel.

Along with the brown-bag lectures, the Simons Center facilitates the 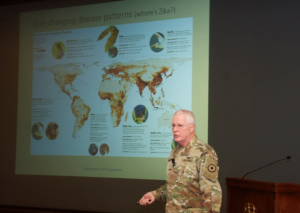 Dr. Lee Norman presents “Modern Epidemics: Why they occur and why we should worry!” at the College on April 23, 2018, in the CGSC Foundation’s Distinguished Speaker Series facilitated by the Simons Center.

Foundation’s “Distinguished Speaker Series” to bring speakers of note that span the gamut of leadership and ethics, organizational effectiveness, collaboration, as well as current events and issues in business, government and the military. The DSS also includes oversight of the Foundation’s other periodic lecture series, which in the past have included the “General of the Armies John J. Pershing Great War Centennial Series,” a lecture series dedicated to educating audiences about WWI during its 100-year commemorations; and the “Vietnam War Commemoration Lecture Series,” a lecture series devoted to educating audiences about the Vietnam War during the nation’s observance of its 50th anniversary.

The Simons Center also operates in the physical arena by sponsoring or helping organize special events and conferences focused on interagency matters. In addition, the Center sponsors academic awards for the graduating classes of Command and General Staff Officers Course and the School for Advanced Military Studies (SAMS) with the “Colin L. Powell Interagency Student Award” and the “Simons Center Interagency Writing Award.” Last, the Center administers a “Simons Center Fellows/Scholars/Interns” program that brings graduate and Ph.D. candidates into the CGSC arena to further their studies in interagency/ government leadership, operations and related issues. – Fourteen students from both civilian and military backgrounds have completed the program since its launch in 2011.

For ten years, the Simons Center has operated with a vision established by the Foundation’s first CEO Bob Ulin and Foundation Trustee Mark “Ranger” Jones and supported by Ross Perot,” Cox said, “but frankly the mission they initially established for the Center was to only operate for five years. We have proudly exceeded that initial mandate and believe the mission of the Simons Center is still very relevant and viable in the current operational environment of the nation.  – Here’s to ten more years.”