The U.S. Army’s School of Advanced Military Studies (SAMS) Class of 2022 graduated May 26, 2022, in a ceremony conducted in the Eisenhower Auditorium of the Lewis and Clark Center on Fort Leavenworth. The class consisted of 107 students graduating from the Advanced Military Studies Program and 17 from the Advanced Strategic Leadership Studies Program, including 11 international officers from eight countries and two federal civilian employees representing the United States Agency for International Development. 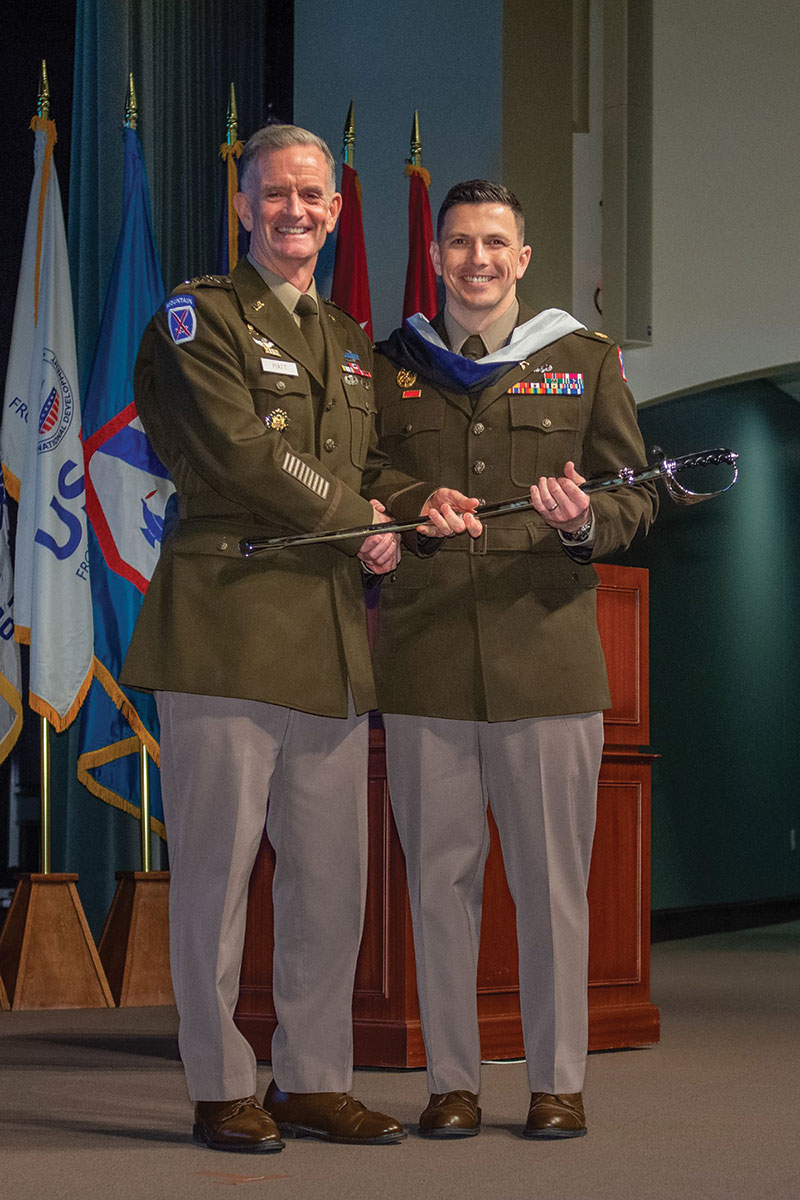 “All of you now are thinkers of your profession and charged with doing more than just learning,” Piatt told the graduates. “We must now engage in a broad strategic conservation to do more than write a campaign plan. We must now campaign for peace. Humanity depends on it,” he said.

Piatt graduated from the Advanced Military Studies Program at SAMS in 1999. He recalled his experiences as a SAMS student and his career afterward. “I didn’t change the Army from this school, but this school changed me,” he said.

Maj. Christopher P. Zaczyk received the Col. Thomas Felts Leadership Award for the top AMSP student. The award is presented to the student who best exemplifies all the desired attributes of an Advanced Military Studies Program graduate and is considered the top award in SAMS. The award is named in honor of Felts who graduated from the Advanced Military Studies Program in 1998 and the SAMS senior program in 2005. He was killed in action in Iraq in 2006.

Zaczyk, whose next assignment is with the 1st Infantry Division at Fort Riley, Kansas, said his experience at SAMS changed the way he thinks about the military profession and everyday life. He said he was very grateful to accept the Felts award on behalf of his class. 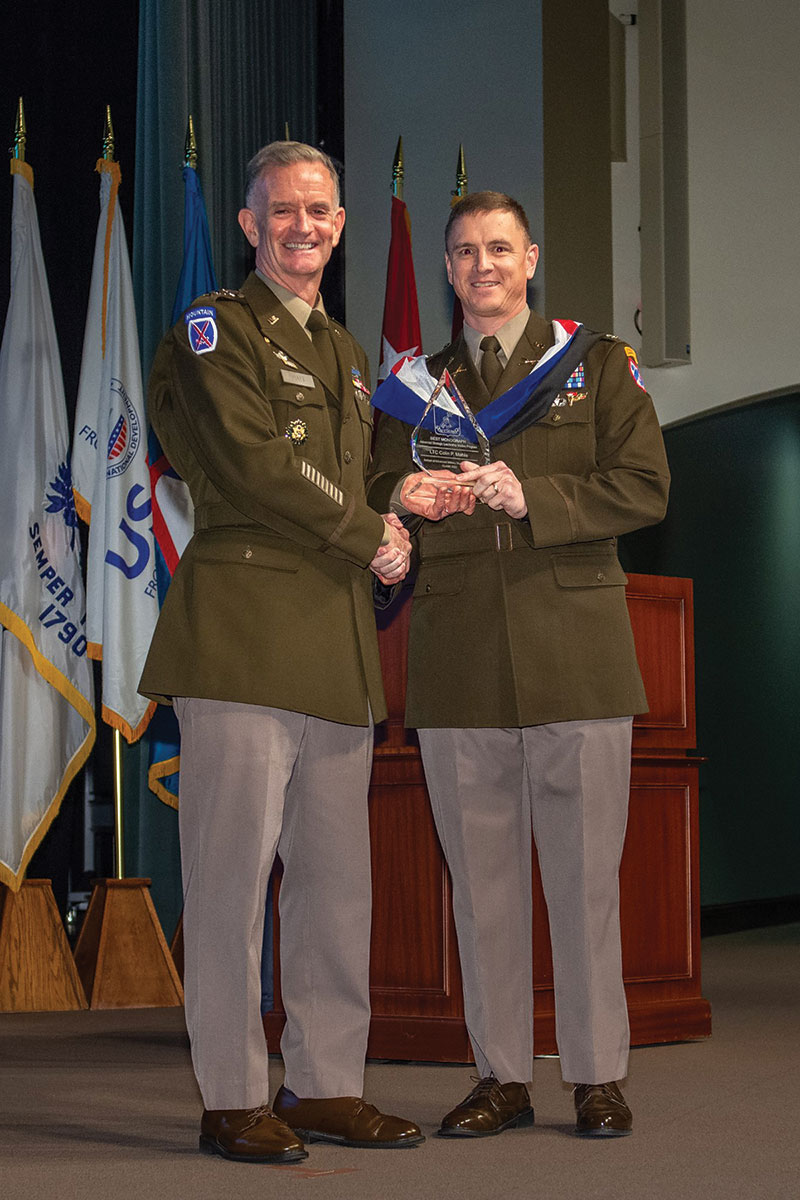 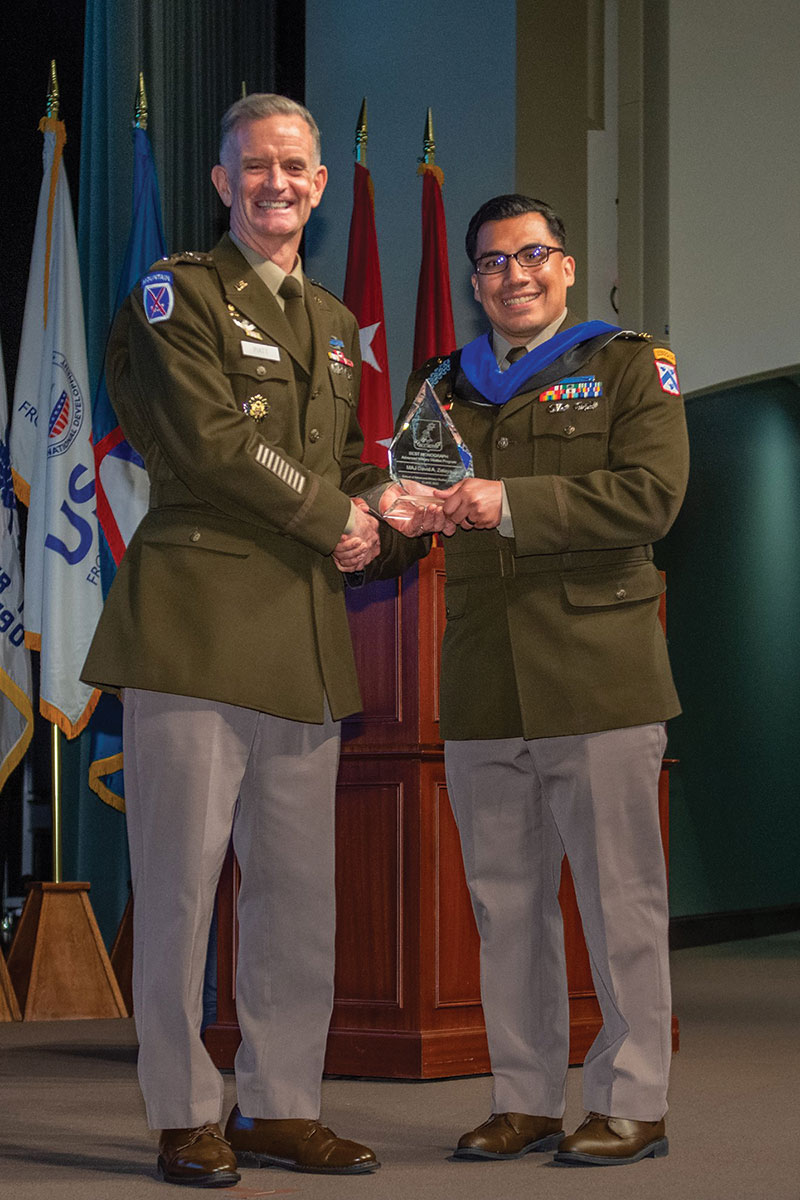 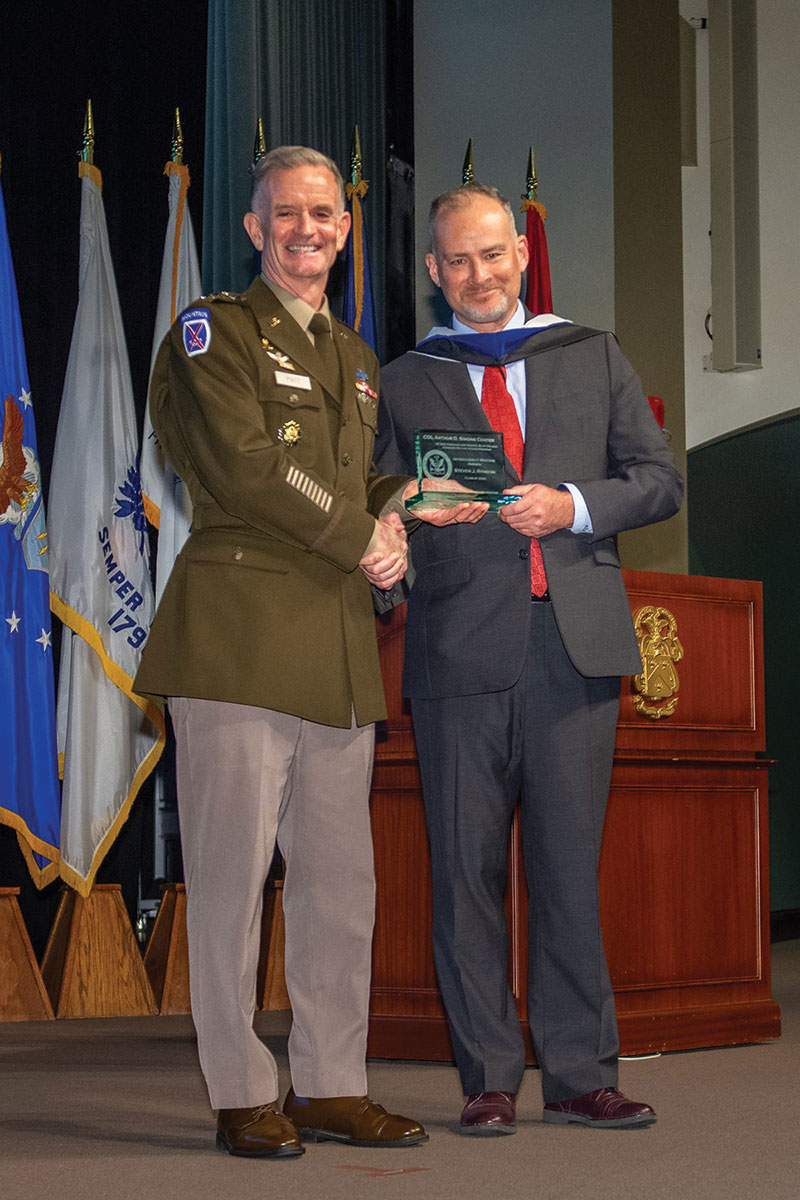 Lt. Col. Colin P. Mahle received the award for best Advanced Strategic Leader Studies Program monograph. His monograph was focused on U.S. Artic Policy, an area he said is under-studied and under-researched. He had been in Alaska about six months prior to starting SAMS and that spurred his interest in the region. “Follow your heart,” is his advice for officers just starting out.

Maj. David A. Zelaya received the award for the best Advanced Military Studies Program monograph. Zelaya said SAMS was challenging and filled with rigor. It helped develop who he will be as an officer and a person. His monograph topic was operational art and making it accessible to commanders and staffs. His advice to young officers is to “follow your passion and find those things that get you going in the morning and keep you going late into night. Those things are hard to find, it takes work. But, once you find them, all of a sudden, service is no longer a burden. It’s an opportunity that will drive you to places that you never thought you could go.”

Mr. Steven J. Rynecki, U.S. Agency for International Development (USAID), was presented with the Simons Center Interagency Writing Award for the best monograph focused on interagency cooperation and coordination. Rynecki said his experience at SAMS as a USAID foreign service officer was one of the highlights of his career. “I’ve been able to get a better understanding of what the Department of Defense, our colleagues in the U.S. Army and other branches, are doing overseas where I spend most of my career.” Also, he was able to bring consideration of international development into the discussions with his classmates. His monograph was focused on preserving internet standards to keep the internet free, open, and interoperable in the Indo-Pacific region.

Maj. Alexander J. Bedard received the Iron Leader Award for scoring the highest on the six event Army Physical Fitness Test, scoring the maximum of 600 points on the test. Bedard departed the class early for his next assignment and was not present at the graduation ceremony.

The CGSC Foundation sponsors all the awards for SAMS graduates.

The Advanced Military Studies Program is a 10-month course and is a graduate level education program to develop innovative and adaptive leaders who excel at operational art and are willing to experiment and accept risk. Program graduates apply critical and creative thinking to solve complex problems, demonstrate mastery of joint and Army doctrine, and anticipate the future operational environment. They synthesize the elements of U.S. national power in joint, interagency, intergovernmental and multinational operations, and demonstrate effective communications.

The Advanced Strategic Leader Studies Program is a Senior Service College program, equivalent to the Army War College, which focuses on planning and executing the full spectrum of unified land operations with government and nongovernmental agencies and international partners. Its students comprise senior lieutenant colonels, colonels, and their civilian equivalents. Military class members have typically commanded a battalion-sized unit in the armed services.

Graduates of the Advanced Military Studies Program receive the Master of Arts in Military Operations and graduates of Advanced Strategic Leader Studies Program receive the Master of Arts in Strategic Studies. The degrees are awarded by the Command and General Staff College based on students successfully completing the School of Advanced Military Studies curriculum, passing an oral comprehensive exam, and successfully completing an extensive monograph based on original research. Completed monographs are published electronically by the Ike Skelton Combined Arms Research Library. CGSC is accredited by the Higher Learning Commission.

Watch the full ceremony below or on the CGSC YouTube Channel: