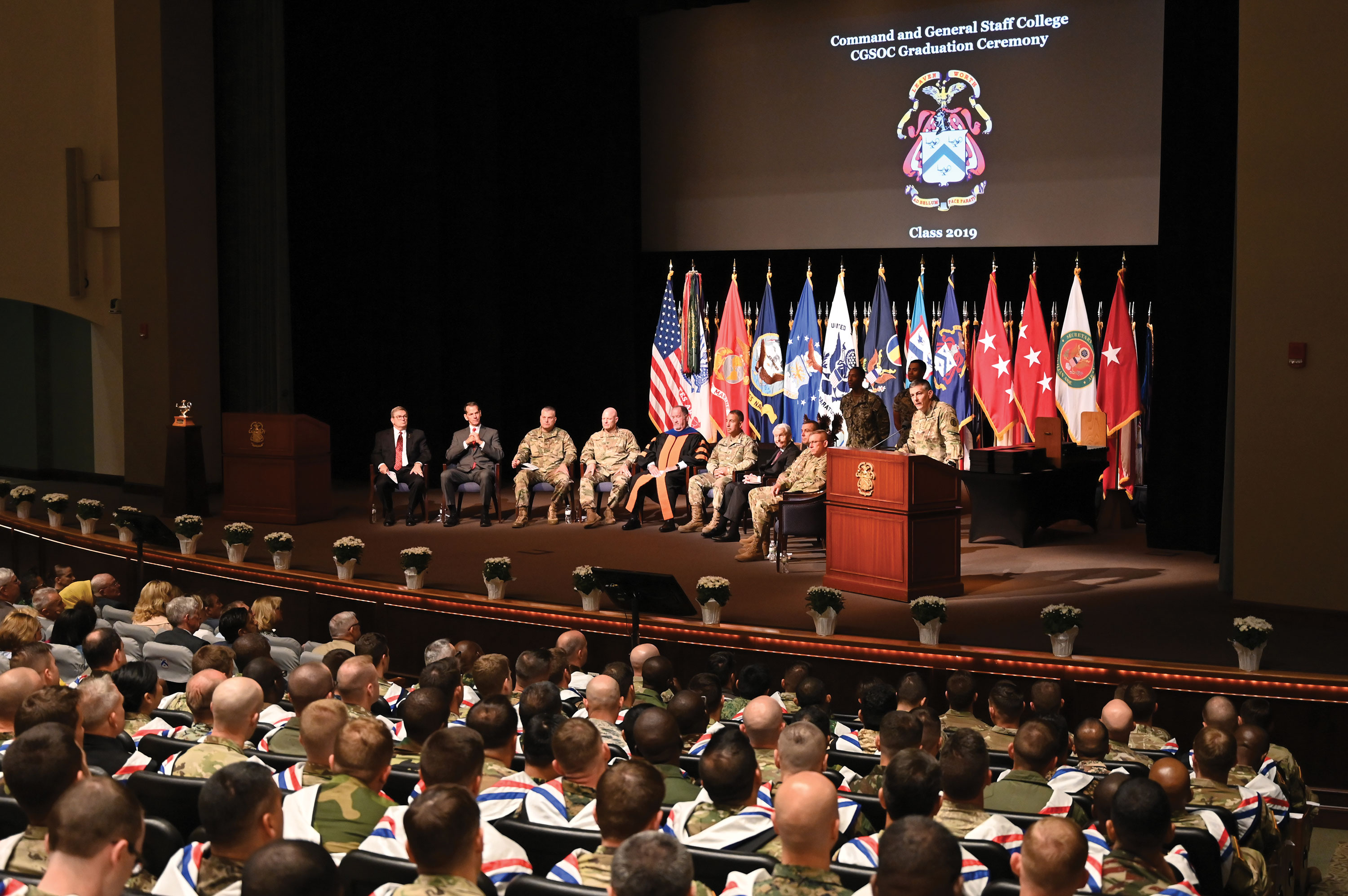 General Stephen J. Townsend, commanding general of the U.S. Army Training and Doctrine Command, delivers remarks at the graduation ceremony for the CGSOC Class of 2019 in the Lewis and Clark Center on Fort Leavenworth. (photo by Mark H. Wiggins)

Townsend told the graduating students they were leaving CGSC much better prepared than he was when he graduated from the course 25 years ago. He also said they leave with an excellent professional network of peers and friends. “You can’t even imagine the situations where this network of friends and fellow students will come in handy in years ahead in your career but it will, mark my words,” said Townsend. “Your first responsibility as a professional officer is to master our trade. Your core competency is to fight and win our nation’s wars,” he said. 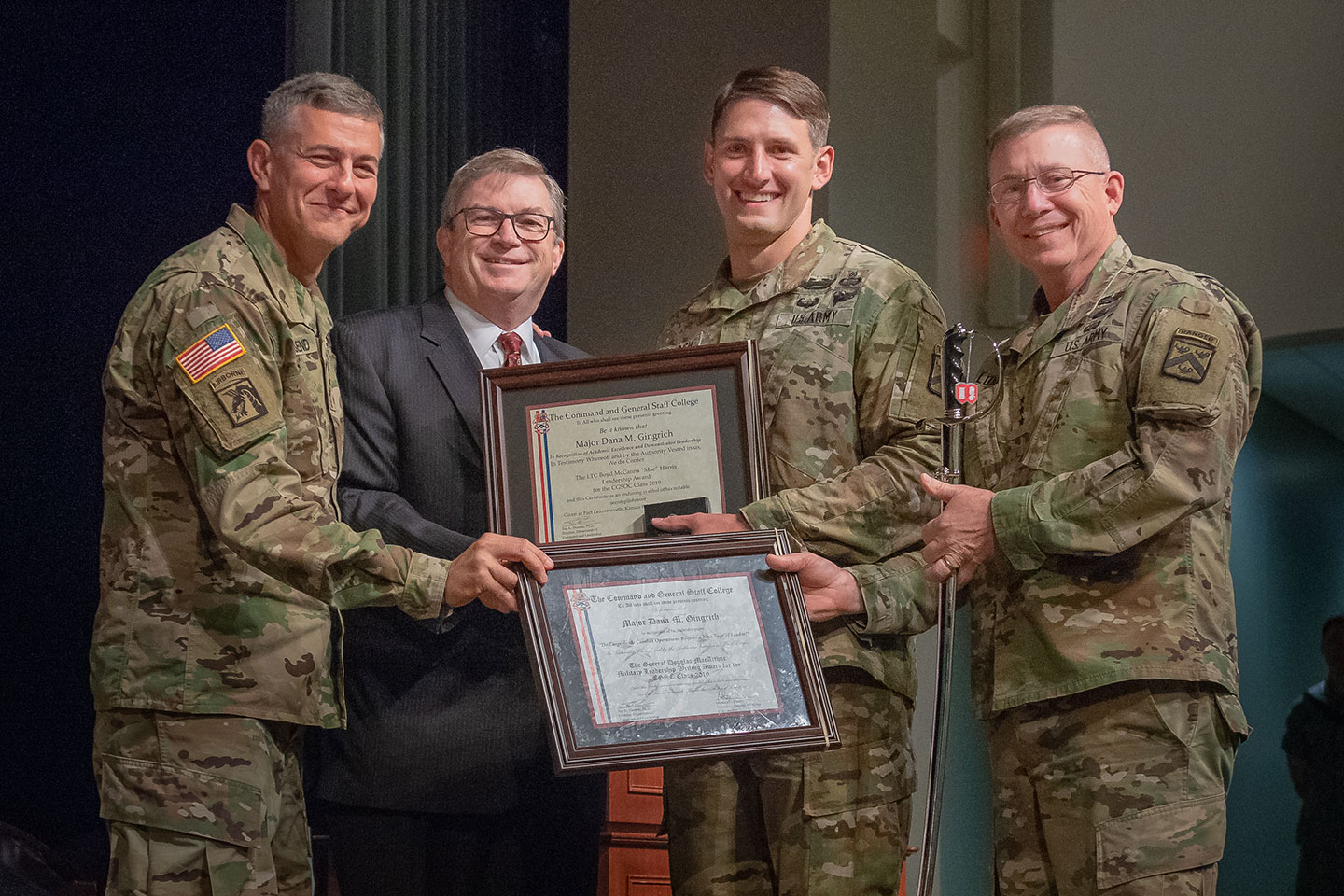 Opening the graduation ceremony, Lt. Gen. Michael Lundy, Commandant of the Command and General Staff College said, “Your watch starts again this afternoon when you leave this post. You’re now stewards of our profession and there’s more expected of you by your Soldiers, Sailors, Airman, and Marines and your leaders. I’m absolutely confident that you’re all ready to meet that challenge. Our nation and all the nations that are represented here by our international officers are in great hands.”

A highlight of the ceremony came during the individual award presentations where Maj. Dana M. Gingrich earned four awards. As Mike Hockley, Civilian Aide to the Secretary of the Army for Kansas and Chairman of the CGSC Foundation, was presenting Gingrich with the Lt. Col. Boyd McCanna Harris Leadership Award, Lt. Gen. Lundy briefly halted the proceedings and gathered up the other three awards Gingrich had already been presented and he and Gen. Townsend joined them for a group photo. In addition to the Harris Leadership Award, Gingrich earned the top U.S. student award – the General George C. Marshall Award, the General George S. Patton Jr. Master Tactician Award, and the General Douglas MacArthur Military Leadership Writing Award.

Graduation marks the completion of the 10-month Command and General Staff Officers Course that develops war-fighting and adaptive leadership skills necessary for military officers to be proficient in Unified Land Operations. The Command and General Staff College is an educational center of excellence renowned in the study of leadership, the conduct of joint and combined land warfare, and the application of Joint, Interagency, Intergovernmental, and Multinational organizations to synchronize all elements of power to achieve national objectives.

In addition to completing the graduate-level course, approximately 150 students earned the Master of Military Art and Science Degree. Students earn the master’s degree by successful completion of the Command and General Staff Officers Course, successful completion of an oral comprehensive exam, and writing and orally defending a thesis based on original research. The College is accredited by the Higher Learning Commission of the North Central Association of Colleges and Schools to award the master’s degree.

Major General Hans Schlup Award (Award is given to the student who best fostered international relations) — Major Martijn Reuvers, Netherlands
Sponsored by the CGSC Foundation through a gift from the CGSOC Class of 1978

For more photos from the ceremony see the albums on Flickr: