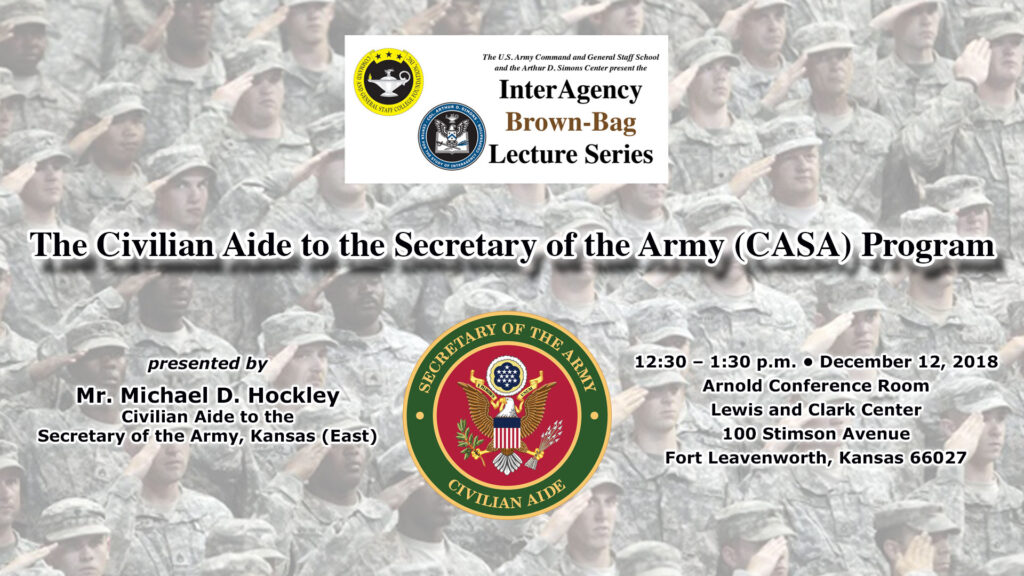 The next lecture in the InterAgency Brown-Bag Lecture Series co-hosted by the U.S. Army Command and General Staff School and the Simons Center for Interagency Cooperation, is scheduled from 12:30 – 1:30 p.m., Dec. 12, in the Arnold Conference Room of the Lewis and Clark Center on Fort Leavenworth.

Civilian Aide to the Secretary of the Army (CASA) Michael D. Hockley will lead a discussion on the CASA program. Hockley will discuss how The Honorable (Dr.) Mark T. Esper, Secretary of the Army, uses his Civilian Aides across the country to keep the public informed about why a strong and robust Army is vital to our national security, to advise him on regional issues, and to promote good relations between the Army, Congress and the American people.

Michael D. Hockley is a law partner with Spencer Fane, LLP, in Kansas City. His practice concentrates on litigation, environmental law, and renewable energy. He serves in leadership roles in a variety of civic, professional, and business organizations to include founding trustee and chair of the Command and General Staff College Foundation; past chair, United Way of Greater Kansas City Board of Trustees; treasurer, board of regents, American College of Environmental Lawyers; and member, board of directors, Armed Forces Bank NA. He was named amongst the Best Lawyers in America as Kansas City Environmental Lawyer of the Year in 2012, 2016, and 2018, and received the Ben Craig Distinguished Service Award from the Overland Park Rotary Club in 2014.

Hockley graduated from the United States Military Academy in 1973 and the University of Nebraska College Of Law in 1980. He served for 28 combined years as an active duty and reserve Army officer.  He was sworn in as the Civilian Aide to the Secretary of the Army for Kansas (East) in April 16, 2018.