The 10th lecture in the Vietnam War Commemoration Lecture Series is scheduled for Jan. 31 at 6 p.m. in the Stove Factory Ballroom in downtown Leavenworth, Kansas (417 S. 2nd Street). A reception sponsored by the CGSC Foundation will begin at 5:30 p.m.

Dr. James H. Willbanks, General of the Army George C. Marshall Chair of Military History at the U.S. Army Command and General Staff College, will discuss how in the Tet Offensive of 1968, Viet Cong and North Vietnamese forces launched a massive countrywide attack on South Vietnam. Though the Communists failed to achieve their tactical and operational objectives,  Hanoi won a strategic victory caused many Americans and key presidential advisors to question the wisdom of prolonging combat.  In many ways, the Tet Offensive proved to be the watershed event of the war, causing a major shift in U.S. policy and ultimately the withdrawal of U.S. military forces. 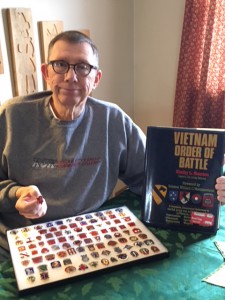 Also, as an added feature of this lecture, Vietnam military collector Joe Grasela will be on hand to present his collection of more than 360 unit crests of the U.S. Army units that served in Vietnam. Grasela, a retired Army officer and former CGSC instructor, said his collection is based on work done by Shelby Stanton and published in his book Vietnam Order of Battle.

All lectures in the series are free and open to the public. This lecture series is presented by CGSC’s Department of Military History, U.S. Army Garrison Fort Leavenworth and supported by the CGSC Foundation and the Henry Leavenworth Chapter of AUSA.

The CGSC Foundation has received additional support for the Vietnam lectures in academic year 2018 from the national headquarters of the Veterans of Foreign Wars (VFW) in Kansas City, Missouri, First Command Financial Services in Leavenworth, Kansas, and Vietnam Veterans of America (VVA).