The CGSC Foundation announces its second year of engagement with the national Wreaths Across America to remember our nation’s fallen heroes during the holidays. 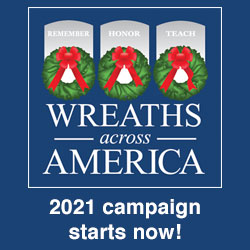 Throughout 2021 the Foundation will be encouraging others to sponsor wreaths to place on graves in the Fort Leavenworth National Cemetery in honor of the veterans buried there. The wreaths will be placed on National Wreaths Across America Day, Dec. 18, 2021.

“Part of the CGSC Foundation’s mission is to conduct outreach and to provide support to Soldiers and families,” said Rod Cox, Foundation president/CEO. “I strongly believe that Wreaths Across America is an important way to honor our veterans who have gone before us.”

“It’s ‘just a wreath’ some might say, but it’s more than that,” Cox added. “The Wreaths Across America mission isn’t just laying the wreath, it’s a national effort to ‘Remember, Honor and Teach’ all Americans about the sacrifices of veterans for our country.”

Wreaths Across America is a 501(c)(3) nonprofit organization founded to continue and expand the annual wreath-laying ceremony at Arlington National Cemetery begun by Maine businessman Morrill Worcester in 1992. The organization’s mission – Remember, Honor, Teach – is carried out in part each year by coordinating wreath-laying ceremonies in December at Arlington, as well as at thousands of veterans’ cemeteries and other locations in all 50 states and beyond.

The CGSC Foundation’s Wreaths Across America (WAA) effort is focused on the Fort Leavenworth National Cemetery. The Foundation is working with Diana Pitts, the WAA Location Coordinator for the cemetery. Pitts’s son, Cpl. David Unger, who was killed in Iraq on Oct. 17, 2006, is buried there. Pitts has assigned Section N of the cemetery, which includes 900 graves, to the CGSC Foundation.

“Our goal is to honor each of the 900 veterans in Section N of the Fort Leavenworth National Cemetery with a wreath this year,” said Cox, “but what we really want is to put a wreath on every grave in the entire cemetery. That’s why we’re starting the work now to communicate this effort and get others committed to helping us in this effort.”

The Fort Leavenworth National Cemetery was established in 1862 as one of 14 national cemeteries at that time. Today the cemetery has more than 23,000 graves of veterans representing every conflict since 1812. Notable veterans buried at Fort Leavenworth include Captain James Allen, 1st U.S. Dragoons, who died in August 1846. Allen’s is the oldest known military grave in the cemetery. Also, the remains of Brigadier General Leavenworth, the fort’s namesake, were disinterred from Woodland Cemetery in Delhi, N.Y., and reinterred in the national cemetery on Memorial Day in 1902. Nine Medal of Honor recipients are also buried there, including Capt. Thomas W. Custer, brother of Lt. Col. George Custer. Thomas received the Medal of Honor twice while serving in the U.S. Army, Company B, 6th Michigan Cavalry; first for capturing the flag at Namozine Church, Virginia, on May 3, 1865, and second for actions at Sailor’s Creek, Virginia, April 1865. Custer died in 1876.

Cox is encouraging all friends, family, staff, faculty, students and alumni of CGSC and the CGSC Foundation to sponsor a wreath to honor the veterans buried at Fort Leavenworth. For more information and to sponsor a wreath, visit the Foundation’s Wreaths Across America site by clicking the link below.

« Read Previous Post: ‘The General and the Ambassador’ discuss U.S. and Israel
Read Next Post: DHS to transform whole-of-government approach to cybersecurity »