The U.S. Department of State and the U.S. Agency for International Development (USAID) have released the 2015 Quadrennial Diplomacy and Development Review (QDDR), Enduring Leadership in a Dynamic World. The review was launched in April 2014.

The 2015 QDDR builds on the previous edition, focusing on priority reforms that are crucial to enhancing the effectiveness, agility, and innovative spirit of U.S. diplomacy and development. The QDDR is meant to be the “blueprint for the next generation of American diplomacy,” and centers around four global policy priorities for State and USAID:

In his executive summary, Secretary of State John Kerry said that State and USAID are mobilizing dynamic partnerships, building broad coalitions, and leading interagency and international teams in confronting current global challenges and fulfilling the missions of both State and USAID.

The QDDR also sets out priorities to support State and USAID staff. 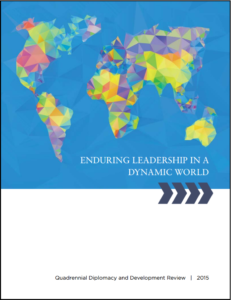