During their research, BENS found that U.S. law enforcement and intelligence agencies are currently operating without an enterprise-wide concept at the federal level. This inhibits the federal government’s ability to conduct domestic intelligence activities in support of counterterrorism.

While BENS notes that the agencies involved have all made progress since research closed on this report, they maintain that the central themes of their recommendations are still valid.

BENS is a non-profit, non-partisan organization that applies best business practices to public sector challenges in order to help strengthen the nation’s security and improve the performance of government agencies. 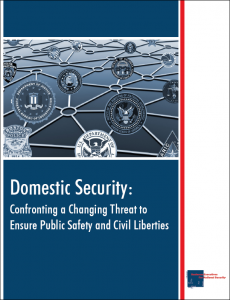 From more information about the BENS report, please follow the link below.
Domestic Security: Confronting a Changing Threat to Ensure Public Safety and Civil Liberties, Business Executives for National Security