A Government Accountability Office (GAO) report released in November of this year assesses the Federal Emergency Management Agency’s (FEMA) efforts in disaster and emergency management since Hurricane Katrina in 2005. In the report, GAO-14-99R, the GAO examines the actions taken to address five select provisions of the Post-Katrina Emergency Management Reform Act of 2006 (Post-Katrina Act).

The selected provisions of the Post-Katrina Act called for the revision of the Catastrophic Incident Annex and the finalization of the Catastrophic Incident Supplement; the implementation of a National Exercise Program and periodic national exercises; the development of an inventory of federal response capabilities and inventory database; the establishment of the annual Catastrophic Resource Report to Congress; and the development of pre-scripted mission assignments and presidential certifications of federal agencies under the National Response Plan.

Among FEMA’s accomplishments since the Post-Katrina Act was enacted is the development of an interagency operational response plan, which was required by a March 2011 Presidential Policy Directive. While the draft of the Federal Interagency Operational Plan for Response has not yet been finalized, it is currently in use. The Federal Interagency Operational Plan for Response is currently being reviewed by multiple agencies and National Security Staff, and is anticipated to be finalized by the end of 2013. 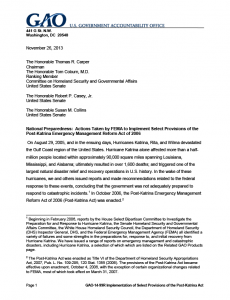 For more information on GAO-14-99R, please follow the link below.
GAO-14-99R, National Preparedness: Actions Taken by FEMA to Implement Select Provisions of the Post-Katrina Emergency Management Act of 2006