The Government Accountability Office (GAO) recently released an audit report that assesses the Department of Homeland Security’s (DHS) and the General Services Administration’s (GSA) vulnerability to cyber attacks. The report, GAO-15-6, examines the extent to which DHS and other federal facilities are prepared to address cyber risk to building and access control systems. While conducting their study, GAO reviewed stakeholders’ authorities to protect federal facilities, visited select facilities to ascertain what was being done to address cyber risks, and interviewed experts about cyber vulnerabilities of building and access control systems.

GAO determined that while DHS has begun to address the cyber risks, much work remains to be done. For instance, GAO found that DHS lacks a policy that defines the problem, identifies roles and responsibilities, analyzes the resources needed, and identifies a method for assessing the cyber risk. DHS’s lack of cyber strategy for facility security is in part because this is an emerging issue, but demonstrates a lack of prioritization on the part of DHS. The report also states that the Interagency Security Committee (ISC) has not incorporated cyber threats to building and access control systems in its Design-Basis Threat report, which an ISC official credited to a shift in focus to active shooter and workplace violence incidents. GAO also found the GSA has not fully assessed the cyber risks to federal facilities. 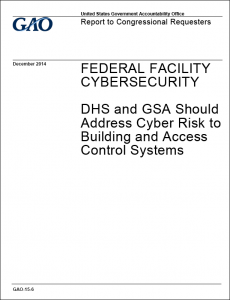