The Red Cross is involved in immediate emergency response, longer-term recovery, and emergency preparedness, and coordinates with the federal government during disasters largely by sharing information. For example, the Red Cross and the Federal Emergency Management Agency (FEMA) share information on the resources available for the response to major disasters, and on where assistance is needed during recovery.

The federal government, states, and the nonprofit sector conduct oversight of the Red Cross that is focused on governance and financial issues, not the organization’s performance in disasters. These federal agencies include the Internal Revenue Service, the Department of Defense, FEMA, and the State Department. Despite these forms of oversight, no regular, independent evaluations are conducted of the impact or effectiveness of the Red Cross’s disaster services.

While the Red Cross is not a federal agency, they have a critical role under the nation’s disaster response system. As such, GAO recommends that Congress consider establishing a federal mechanism to evaluate the Red Cross’s performance in domestic disasters. The Red Cross neither agreed nor disagreed with GAO’s recommendation. 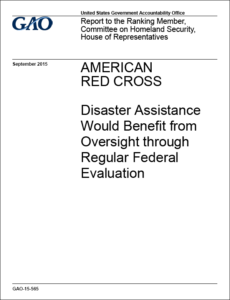 For more information on GAO’s report on the Red Cross, please follow the link below.
GAO-15-565, American Red Cross: Disaster Assistance Would Benefit from Oversight through Regular Federal Evaluation