The updated strategy reflects the new global security situation, which includes threats from both traditional state actors and transregional networks of sub-state groups. Chairman of the Joint Chiefs of Staff Gen. Martin Dempsey noted in his introduction of the document that “Since the last National Military Strategy was published in 2011, global disorder has significantly increased while some of our comparative military advantage has begun to erode.”

The strategy specifically calls out Iran, Russia and North Korea as aggressive threats to global peace, and also addresses concerns about U.S. technological superiority and terrorist groups like the Islamic State. The new National Military Strategy focuses on the importance of partnerships to maintain the delicate security balance around the globe, highlighting interagency and international cooperation, and stating that “Timely interagency planning and coordination also will be leveraged to develop holistic options that serve to integrate all elements of national power.” 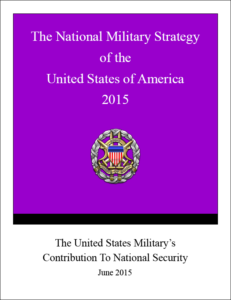