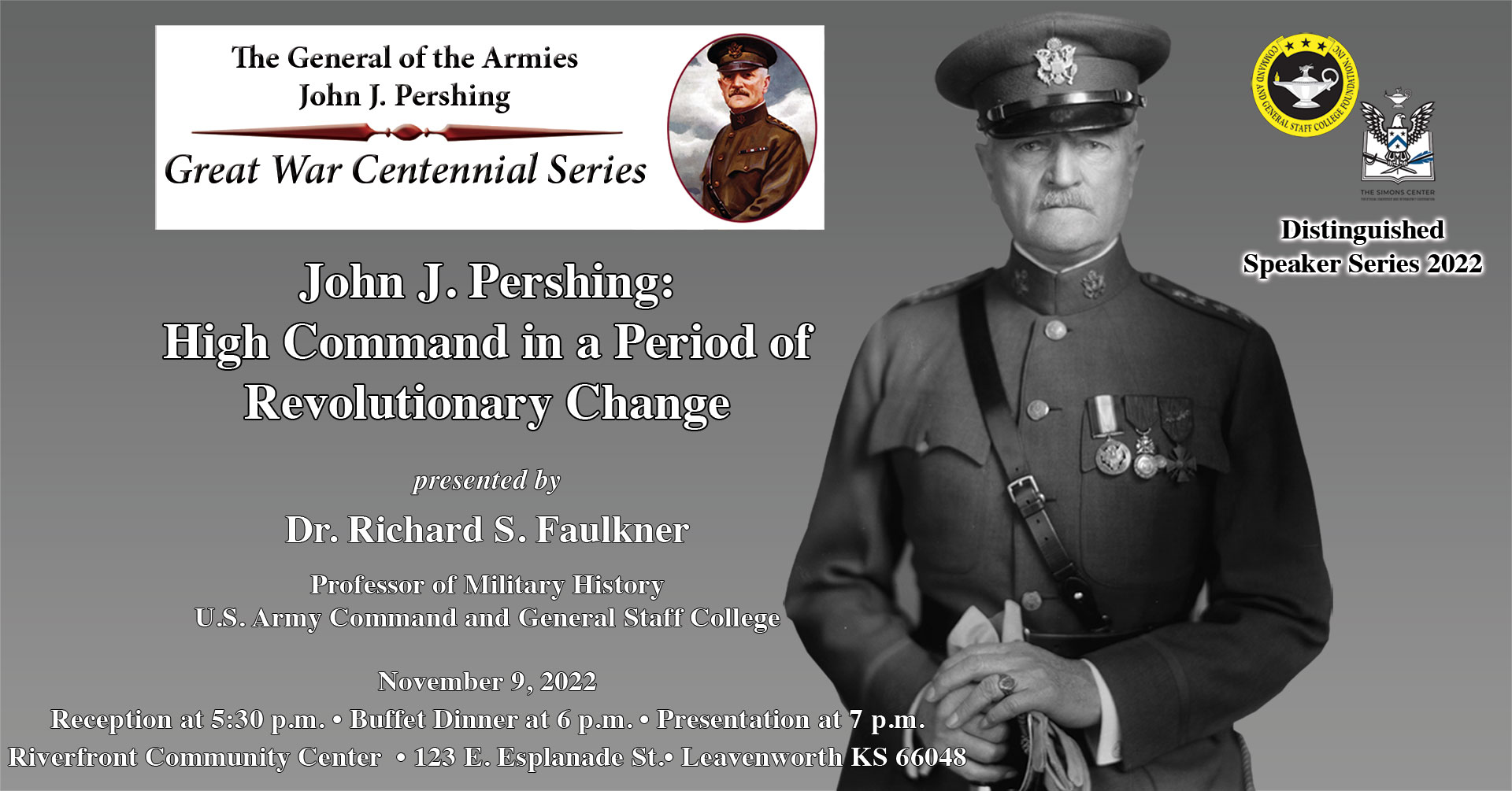 The CGSC Foundation and its Simons Center are hosting a military history lecture focused on Gen. John J. Pershing on Nov. 9, 2022 at the Riverfront Community Center in downtown Leavenworth, Kansas (123 E. Esplanade St.). A reception begins at 5:30 p.m., the buffet dinner starts at 6 p.m. and the presentation will begin at 7 p.m.

Tickets for the event are $35 per person in advance or $40 per person at the door.

In this 20th lecture in the General of the Armies John J. Pershing Great War Centennial Series, Dr. Richard S. Faulkner, professor of military history at the U.S. Army Command and General Staff College, will discuss leadership challenges of Gen. John J. Pershing. Prior to World War I, Pershing was an officer fully immersed in the realities and mindsets of a small constabulary army. Yet, after a lifetime of fighting limited wars and insurgencies, in 1918 he found himself serving as the commander of a two-million-soldier army waging mass conventional warfare. Faulkner will examine the challenges that Pershing faced in preparing and leading the American Expeditionary Forces in World War I during one of the most revolutionary periods of military technological, organizational, and doctrinal changes in human history.

Dr. Richard S. Faulkner is a professor of military history at the U.S. Army Command and General Staff College. Prior to teaching at CGSC for the last 20 years, he served 23 years in the U.S. Army, most notably as a tank company commander in the 1st Armored Division during Operation Desert Storm. Faulkner is the author of The School of Hard Knocks: Combat Leadership in the American Expeditionary Forces (Texas A&M Press, 2012), which was the recipient of the Society for Military History’s 2013 Distinguished Book Award. His second book, Pershing’s Crusaders: The American Soldier in World War I (University Press of Kansas, 2017) received the World War I Association’s 2017 Norman B. Tomlinson, Jr. Prize for the best work of history in English on World War One, the Organization of American Historians’ 2017 Richard W. Leopold Prize, and the Army Historical Foundation’s 2017 Excellence in U.S. Army History Book Award.