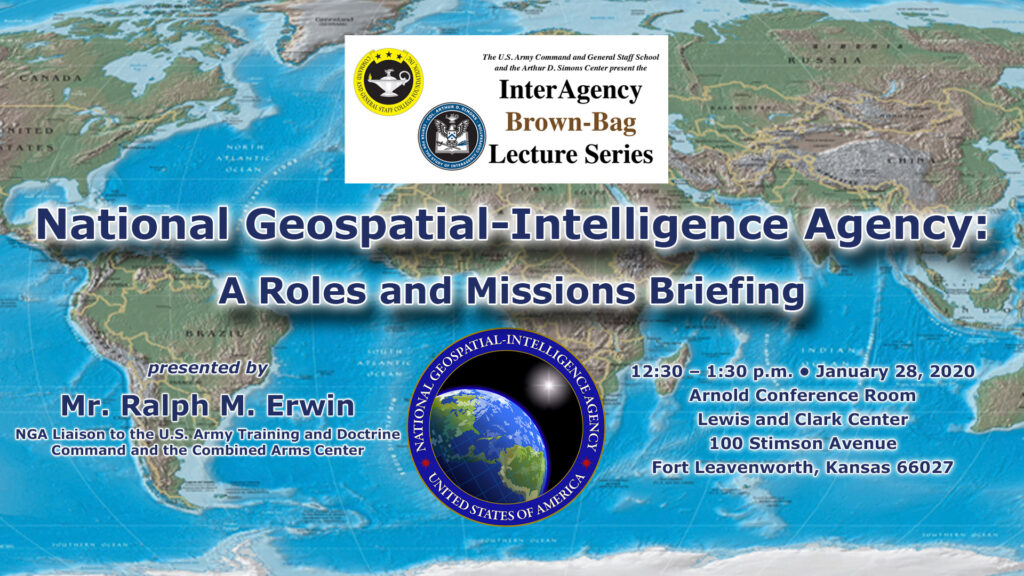 Mr. Ralph M. Erwin, Senior Geospatial Intelligence Officer, will lead the discussion in the next InterAgency Brown-Bag Lecture at 12:30 p.m., Jan. 28, in the Arnold Conference Room of the Lewis and Clark Center on Fort Leavenworth.

Erwin will outline the roles and missions of the National Geospatial-Intelligence Agency (NGA) and how it serves as both a combat support agency under the Department of Defense and an intelligence agency as part of the United States’ intelligence community.

Ralph M. Erwin is the Senior Geospatial Intelligence Officer assigned by the Army National Geospatial-Intelligence Agency (NGA) Support Team to be the NGA Liaison to the US Army Training and Doctrine Command (TRADOC) and the Combined Arms Center (CAC) at Fort Leavenworth, Kansas. His responsibilities include the integration of geospatial intelligence education into U.S. Army TRADOC educational institutions, CAC elements, and the Command and General Staff College. He is a Director of National Intelligence designated Intelligence Community Officer and served as a Senior Mentor to the Afghan Geodesy and Cartography Head Office in 2011.

Mr. Erwin’s other service to our country and in the private sector include duty as the deputy director of the U.S. Army TRADOC Program Integration Office for Terrain Data at the U.S. Army Engineer School, service as a U.S. Army Field Artillery officer, time at the Defense Advanced Research Projects Agency as the main battle tank simulation operations manager, and as a topographic systems combat developer for Lockheed Martin Corporation. Mr. Erwin is a graduate of Wentworth Military Academy and he holds a B.S. in mathematics from Cameron University and a Masters of Strategic Studies from the U.S. Army War College.

The CGSC Foundation and the Simons Center have received support for all brown-bag lectures in academic year 2020 from First Command in Leavenworth, Kansas. New this year, First Command is offering attendees free lunches during the brown-bag presentations. For information on obtaining a lunch, contact the First Command office at 913-651-6820.

Download the schedule for all upcoming InterAgency Brown-Bag Lectures in academic year 2020.