FBI to present at next InterAgency Brown-Bag Lecture – Feb. 25 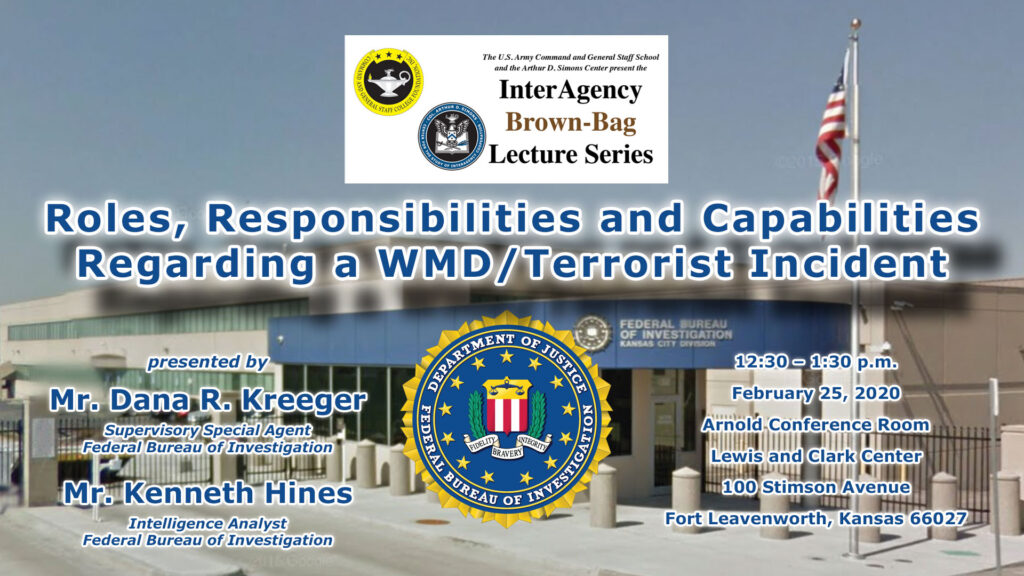 The seventh presentation of the InterAgency Brown-Bag Lecture Series for CGSC academic year 2020 will be conducted at 12:30 p.m., Feb. 25, in the Arnold Conference Room in the Lewis and Clark Center on Fort Leavenworth. This presentation features two agents from the Federal Bureau of Investigation’s Kansas City Division – FBI Supervisory Special Agent Dana Kreeger and Intelligence Analyst Kenneth Hines. Kreeger and Hines will lead a discussion on the Bureau’s roles, responsibilities, and capabilities regarding a weapons of mass destruction or terrorist incident. The presentation will include information on crisis response, incident determination, and crime scene operations.

Supervisory Special Agent Dana R. Kreeger serves as the Weapons of Mass Destruction Coordinator for the FBI’s Kansas City office. Joining the Kansas City office in 2009, he has served with the Domestic Terrorism and WMD Squad and as the Team Leader for the Hazardous Evidence Response Team. Kreeger joined the FBI in 2002 and previously served in the Portland, Oregon field office focusing on domestic terrorism and WMD threats conducting investigations in both Oregon and Washington. Prior to joining the FBI, Kreeger worked for Black and Veatch engineering and design company in Kansas City, Missouri.

Intelligence Analyst Kenneth Hines is assigned to the FBI Kansas City Field Office. He is an expert in domestic and home-grown terrorism and weapons of mass destruction investigations. Hines has over 25 years strategic and tactical intelligence experience as both a retired U.S. Coast Guard officer and FBI Intelligence Analyst. Prior to joining the FBI, Hines was the chief bomb & arson investigator/bomb technician for a large county government agency in Missouri. He holds a bachelor’s degree in communications from the University of Missouri at Columbia and a MBA from Lindenwood University. Hines is a graduate of the FBI Academy at Quantico and the Naval War College. He has been awarded numerous awards for his service to our country to include a Presidential Unit Citation.

The CGSC Foundation and the Simons Center have received support for all brown-bag lectures in academic year 2020 from First Command in Leavenworth, Kansas. New this year, First Command is offering attendees free lunches during the brown-bag presentations. For information on obtaining a lunch, contact the First Command office at 913-651-6820.

Download the schedule for all upcoming InterAgency Brown-Bag Lectures in academic year 2020.